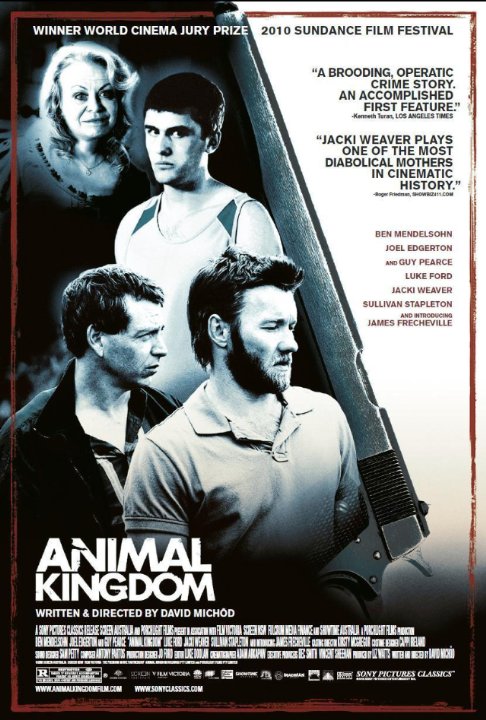 Plot: At just 17, J is caught between his families' criminal enterprise and a detective determined to save him. -- Chris Kavan

There were a lot of great films from 2010, but none left an impression on me quite like this film did. Brilliant. Perfectly acted (especially Jacki Weaver), great writing, excellent use of music, and the film builds slowly to a powerful punch of an ending... overall just a great movie that has become one of the favorite films of 2010.

I kept hearing so much hype about this flick so I couldn't wait to go out & see it but it turned out to be a waste of time.It definitely wasn't as great as I expected it to be.It felt more like a movie you'd watch just because nothing else is good on TV or you couldn't find anything else interesting to pick up at the local video store

A top- notch Australian crime drama. It feels like a movie that is going to drag on at a slow pace, but it actually has a good tempo to it and keeps you drawn in from scene to scene. Good performances all around, with one family member crazier than the next. And no one is more dedicated in keeping it all together more than the mother/grandmother of this dysfunctional and immorally challenged family ( portrayed by Jacki Weaver). As the head patriarch of this bad-ass clan of criminals she has an amazing ability to be both caring and loving as well as cold as ice at the same time.

Craig follows a car with 2 guys who made nasty remarks, handing Joshua âJâ Cody a handgun to scare them off. Andrew âPopeâ Codyâs best friend and partner in crime Barry âBazâ Brown is shot dead in the car. Pope and Darren shoot two police offciers to avenge Baz. âJoshâ and Pope are brought in for questioning. Craig gets shot by a cop and Detective Senior Sergeant Nathan Leckie talks to J. The film kind of represents the quote from J â âKids just are where ever they are, And they just do whatever they're doin', You know? This is where I was, And this is what I was doin', After my mum died, this is just the world I got thrown into.â

I have often avoided Australian films because of the resistible parochial values and rather smug aversion to genre they commonly have, but decided to give this film a shot after reading a number of rave reviews for it. Even with the cautiously optimistic disposition with which I entered the cinema, I was still greatly impressed by the high level of technical expertise and acting featured in it. The script did not weigh itself down trying to incorporate bits of Australiana into its story or characters, though they are certainly there. What matters is that the emerge naturally and as a consequence of David Michod's efforts to tell an emotionally turbulent and sonorous parable of a family in crisis. It has universal application, and frankly that's what Australia needs more of right …

âAnimal Kingdomâ is one of the best Australian films to be released in a long time. Not only this, it is perhaps the best crime drama released this year thus far. A film with outstanding characters brought to life by fantastic acting and an extremely well written script by director and writer, David Michod. Joshua Cody(James Frecheville) goes to live with his grandmother (Jacki Weaver) and his uncles after the death of his mother from a heroin overdose. Although this may seem like a better situation, his uncles are a group of armed robbers who the police are always out to get. As the police get closer and more family deaths occur, life gets more and more complicated for Josh. However, blood runs thicker than water.

What an amazing story and script. âAnimal Kingdomâ has so …

No posts have been made on this movie yet. Be the first to start talking about Animal Kingdom!