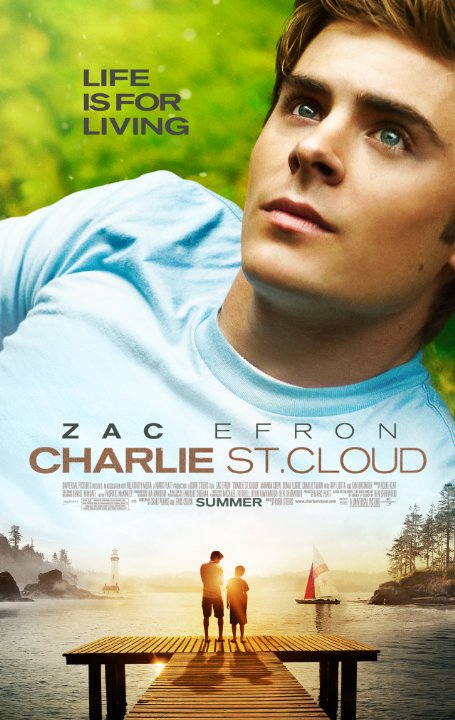 Plot: After his younger brother Sam dies, Charlie St. Cloud takes a job as a caretaker where he is buried. The bond they share allows Charlie and Sam to meet up each night, but when a girl enter the pictures, he may have to choose between two people he loves. -- Chris Kavan

This movie should be called, Charlie St. Cloud: Ghostfucker or How I Killed My Brother. Basically, Zac Efron gets into a car crash with his little brother, his brother dies, and then he can see dead people. He visits his brother every day in the forest and plays catch with him, but then falls in love with a girl and has to say goodbye to his dead ghost brother? There's a...twist? Zac Efron cries a lot and takes his shirt off, so the movie was worth watching to me. But, if you're not into that sort of thing, don't waste your money on this schmaltzfest.

When I saw this movie there were tears in my eyes and goosebumps all over my arm. This movie inspires me to become a better big sister. This movie is about being a hero and doing the right thing. I would have to say this is a great movie and I recomend it to everyone, boy or girl.

Charlie (Zac Efron), a senior in high school with a bright future ahead suddenly finds himself plunging down a path of apathy and regret after the death of his 12 year old brother Sam (Charlie Tahan) in a car accident. 'Charlie St. Cloud' has a lot of supernatural elements to it, considering the main character gains the ability to see the spirit of his dead brother. For five years all seems to go well until Charlie meets Tess (Amanda Crew), and they become attracted to each other. Now Charlie has to choose, between his love for Tess, or continuing to see the spirit of Sam and keeping the promise he made to Sam before the accident! The moments between Charlie and his brother Sam were heartwarming as well as heart breaking. A good movie about miracles, letting go and second chances!

Movies i reccommend by bebejo85

No posts have been made on this movie yet. Be the first to start talking about Charlie St. Cloud!