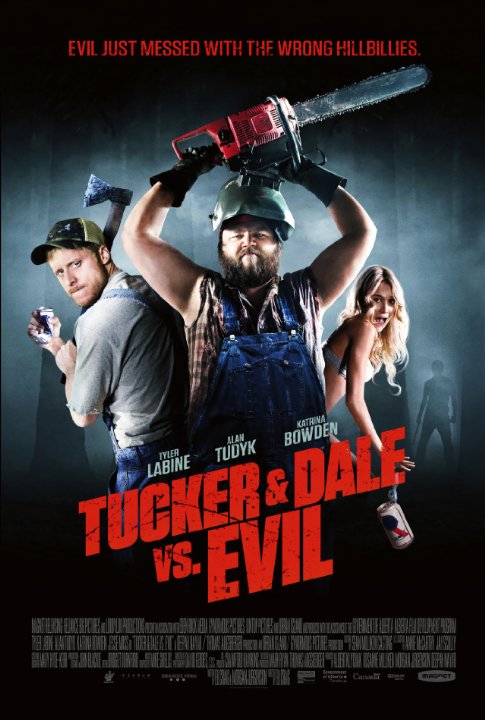 Plot: Two easy-going West Virginian hillbillies looking to enjoy a weekend getaway at their run-down cabin meet a group of preppy college kids who assume they are chainsaw-wielding, inbred monsters and get into a hilarious, bloody confrontation. -- Chris Kavan

It's one admittedly contrived joke, but "Tucker and Dale vs. Evil" hilariously rips the horror genre in a way that puts it in the same vein as "Scream."

Two easy-going West Virginian hillbillies looking to enjoy a weekend getaway at their run-down cabin meet a group of preppy college kids who assume they are chainsaw-wielding, inbred monsters and get into a hilarious, bloody confrontation. This movie works on Comedy and writing because this movie is the funniest movie that I ever seen in my life and that is a fact.

A really funny movie and just a damn great watch. It makes sense to me that it is a Canadian-made movie It has that ambiance to it. Worth the watch for comedy and slasher films.

A fantastic horror comedy that gets things perfect. Playing off the whole redneck murders in the woods motif done in films like Wrong Turn, this tale of mistaken identity gives us surprisingly likeable protagonists. Tucker and Dale are good friends and for the most part decent guys who go off for a manly retreat which will consist of fixing up their vacation home, drinking some beer, going fishing, drinking some beer and spending time with Tucker's dog Bangers. On their way to their version of paradise they cross paths with a group of shallow, preppy college kids who are on their way to camping in the woods. Soon a series of unfortunate events have these guys in circumstances they never expect and the results are downright hilarious at times. The guys who play Tucker and Dale are …

No posts have been made on this movie yet. Be the first to start talking about Tucker & Dale vs Evil!