Life as We Know It Movie Information 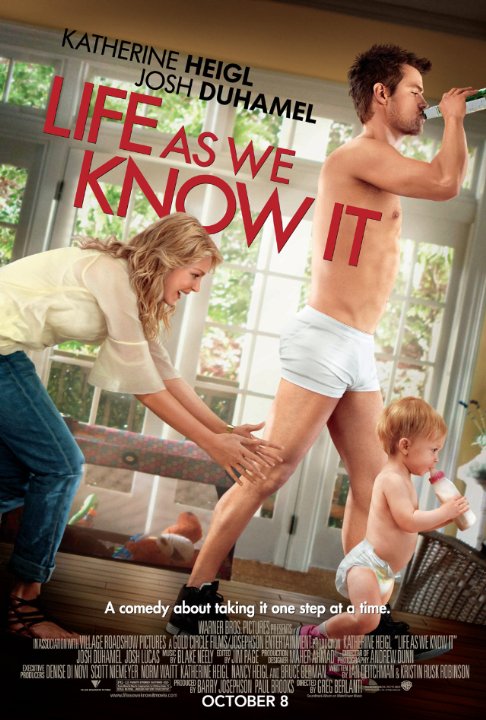 Plot: Following the death of a mutual friend in a car accident, two single adults come together to raise his orphaned daughter. -- Chris Kavan

Holly Berenson (Katherine Heigl) is an up-and-coming caterer and Eric Messer (Josh Duhamel) is a promising network sports director. Had a few comedic but coy moments and life related dialogues. Both leads were good enough to be believable. A bit predictable but the premise and direction was alright. Themes of collaboration, sacrifices and relationships work here though it didn't quite become popular, Life as We Know It has put a smile on this reviewers face.

This movie was one that I anxiously awaited and I wasn't disappointed. It was cute and Josh Duhamel and Katherine Heigl were great.

Typical Heigl movie. Entertaining enough for the watch but nothing really memorable. Though I am getting a bit sick of her only character quirky single 30 something, successful in every area of her life but love.. Oh when will it work out for her? It's like she's the new Jennifer Aniston though slightly more tolerable. She really needs to expand her range. Anyway as for this movie which is almost as interchangeable as any of her others, had it's interesting moments but predictable. Since I don't want to list any spoilers I will only say the ending annoyed me because they had a good chance to go against the grain in this one and give it a real world ending to it, instead however they caved in the most cliche of fashions.

Two people who don't like each other much, uptight Holly (Katherine Heigl), runs a Delicatessen and is shy about relationships while Messer (Josh Duhamel) who is a camera director at a basketball stadium is a sports loving hunk of a guy who likes to womanize and jog. Years ago, the two were set up on a blind date by their mutual best friends. Needless to say was a disaster, and they didn't even get to the restaurant before they realized they weren't the least bit compatible.

Although these two can't stand one another they are stuck together, when their best friends get married and appoint them God parents to their newborn daughter. But tragedy strikes when their friends are killed in a car crash and Messer and Holly are left to be legal guardians to the orphaned baby girl Sophie. Can …

No posts have been made on this movie yet. Be the first to start talking about Life as We Know It!