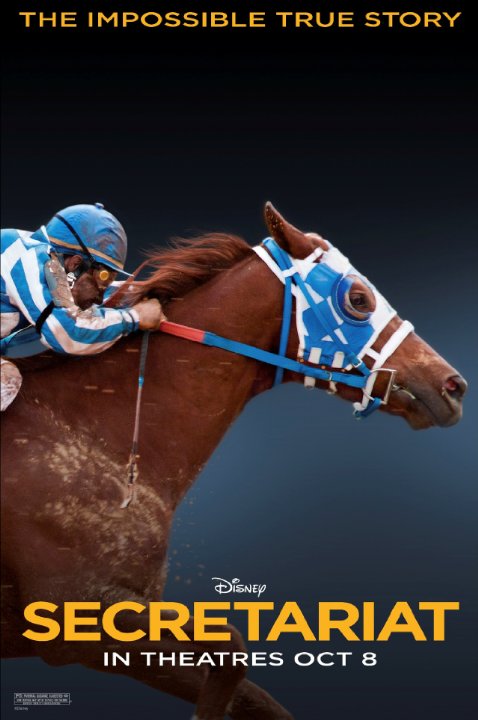 Plot: Penny Chenery is a good housewife and mother, but when she agrees to take over her father's Meadow Stables, she enters the male-dominated horse racing world. With the help of veteran trainer Lucien Laurin, and against all odds, Chenery finds her Triple Crown contender in Secretariat and rocks the racing world. -- Chris Kavan

I am not really a fan of horse movies , but this movie was more about the people than the abilities of the horse for once. It was alright to watch but it still didn't really catch my attention. The best part of the movie was the racing because of the tension and suspense. It was best horse movie that I have seen so far, but it wasn't that good of a movie.

the best, and great movie ever

what an amazing movie, and Disney movies. I loved Secretariat, one of the best movies ever made. I love Diane Lane in this movie and in all of her movies. I am a Diane Lane fan. I thought she did the best job in it. I loved it how it was mostly clean. I loved it how there wasn't really bad language at all. I loved how the story was set really amazing story. I believe in Secretariat. I do repeat some of Diane Lane's part in the movie. I saw Secretartiat in theatres twice. It was amazing in the theatres, and amazing now. One of the best movies and horse movies ever made. I love everything about this movie, and even faith in this movie. They need to make more movies like Secretartiat. All of the actors did a good job in it But Diane Lane did the best. Feel fry to comment me, or anything …

The Greatest Race Horse Ever!

A Denver housewife Penny Chenery Tweedy (Diane Lane) takes over her father's (Scott Glenn) horse racing empire when he falls ill, commuting to Virginia to take care of the farm which is almost bankrupt. Having grown up in the racing world, she knows about bloodlines and believes that her young colt Big Red later renamed Secretariat is blessed with both speed and endurance, and destined to be a champion. She spends most of her time in Virginia, away from her growing family, and misses important events in their lives much of the dismay of her husband Jack Tweedy (Dylan Walsh) who was very convincing as a husband tired of having his wife far from him and their children. She hires an eccentric French Canadian horse trainer Lucien Laurin (a delightful John Malkovich) and the horse is soon …

A solid effort from all involved. The story of Secretariat is told here, as we see his owner, Penny Chenery, go from acquiring the horse, it's training, all the way up to the most important races of its life. There's a good cast here, particularly Lane as Chenery There's a strong attention to detail to recreate the early 70s, from the clothes, hairstyle, right down to the art direction. Given that it's a Disney production, there is the occasional sappy dialogue (mostly about overcoming...everything) and Sham's owner, who serves as Secretariat's main rival, comes across as a ridiculously over-the-top villain. However, the racing scenes are great and I have to say I was pretty entertained, so much so I went to YouTube afterward to rewatch the real Secretariat win the Triple Crown.

Movies Based on True Events by PsychoFaerie

Movies I Want To See by Shelley

Entire movie in trailer? Check.Rehash of an extremely similar film released a few years prior? Check.Same, basic storyline and clichÃ© theme like in other Disney films? Check.Needless to say, I'm not too excited about this one.

Well, I wouldn't call the films formulaic, since they're based on true stories. So they're really just telling incredible stories that overcome a lot of odds. The Hollywood Reporter gave it an excellent review, so others think it's a very enjoyable film. http://www.hollywoodrepor ter.com/hr/film-reviews/s ecretariat-film-review-10 04118740.story

Yeah, but the formulas are all the same. The good guys win. I felt miracle was sub par. Pretty standard sports movie. Remember the Titans was a much better film and I would consider a solid movie. I guess it depends on what you call great? Like Finding Nemo, Cars, Lion King, Monsters Inc., Wall-E great? Because these are great Disney movies.If you are talking Miracle, Remember the Titans and Greatest Game Ever Played great, I would say, I won't be seeing it in the theater but might rent it.

Disney has a pretty good history with sports movies based on true stories. Did you happen to see Miracle or Remeber the Titans. Disney also did the golf film, The Greatest Game Ever Played, so they have a great track record when it comes to sports stories.

I have thought about seeing it. My concern is that it will be like Seabiscuit, which was a terrible film. Also, I have lost hope with most live action Disney movies. They lack most of the magic from their other, older live action movies.&amp;nbsp; This movie and Tron may help restore my confidence if it is good and not just a sports movie about a horse, who was an underdog - where ever single scene was dramatized to the highest extent (gag me - Seabiscuit). So let's hope it is good!