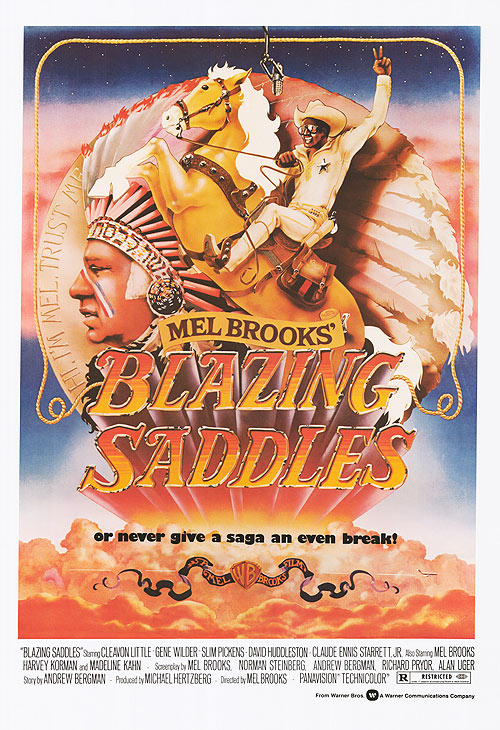 Plot: A small town of Rock Ridge stands in the way of a railroad and nefarious businessman Hedley Lemarr is willing to do anything to make them leave.

It's absolutely fearless in its attempts to satire race and the western genre. It's an undoubtedly funny Mel Brooks classic.

Viewing this again to lighten my viewing of films since I've been watching loads of Cronenbergs and Lynch related flicks. The story revolves around Cleavon Little as Sheriff Bart and Gene Wilder as Jim, aka "The Waco Kid." It's racial themes never seem to date while the story despite its mess, is funny for its time. Funniest portions were the speech "I state your name...state your name," Sheriff Bart cold welcome to the town and audition for the criminals. Some characters can really test your patience and IQ, still the gags are relentless. A few laughable lines: Bart - "Excuse me while I whip this out." Governor Lepetomane - "Work, work, work, work, work, work, work, work, work. (looks at his secretary's breasts) Hello, boys. You have a good night's rest? I missed you."
Though some …

In an attempt to displace the citizens of Rock Ridge in order to grab their land and sell it for huge profit to the rail road, a devious politician sends them a sheriff so "offensive" to their sensibilities that they cannot avoid being driven away.
Despite having previous success with the sometimes hilarious The Producers, Blazing Saddles is the movie Mel Brooks built his - largely undeserved - reputation upon. The film is a perfect blending of genre parody and social satire, even showing some of the surreal post-modernism made popular by the Monty Python team which hit the global mainstream a couple of years earlier. Cleavon Little is absolutely brilliant as Bart, and the reaction of the assembled red necks to his presence make for most of the funniest lines; something for which I …

"Blazing Saddles" is argubly Mel Brooks' best and funniest film. It also ranks up there with "Airplane!" and "The Naked Gun" as one of the funniest movies ever made. Brooks has been well known for his movie spoofs. He has spoofed Hitchcock suspense-thrillers ("High Anxiety"), science fiction movies ("Spaceballs"), old historical epics ("History of the World Part I"), and the horror genre twice ("Young Frankenstein" and "Dracula: Dead and Loving It"). With "Blazing Saddles" Brooks sends up the western genre and does a pretty darn good job of it. There are laughs galore in this picture with most of the jokes done in bad taste. This is one movie that shouldn't be watched on television. Rent it or catch it on cable because if you watch "Blazing Saddles" on a network station or a basic cable …

No posts have been made on this movie yet. Be the first to start talking about Blazing Saddles!