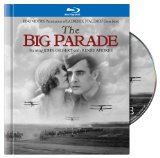 Plot: A man enlists in the U.S. Army during WW I, but he soon finds out that he might have gotten more than he bargained for. -- sapien

This movie was funny in many parts. But, dead serious in many others. I like the anti-war sentiment this movie has. And, I enjoyed the realistic portrayal of World War 1 combat. The plot, however, was kinda lacking. All in all, not a bad movie.

Top Films of 1925 by Neobowler

No posts have been made on this movie yet. Be the first to start talking about The Big Parade!