Jack and the Beanstalk Movie Information 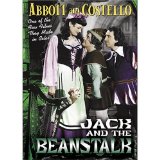 Bud Abbott as the greedy Mr. Dinklepuss and Lou Costello is the idiotic Jack. Jack sells his cow to Mr. Dinklepuss for 5 magic beans. Both arrive in the giant's castle and was captured. The screenplay was decent but this reviewer could have enjoyed it more without the dull singing. Score was apt and the set pieces were realistic. Jack and the giant's fight scene was immature. Jack and the Beanstalk (1952) is a comedy fantasy with not much laughs to offer with little impact in terms of the fairy tale.

No posts have been made on this movie yet. Be the first to start talking about Jack and the Beanstalk!