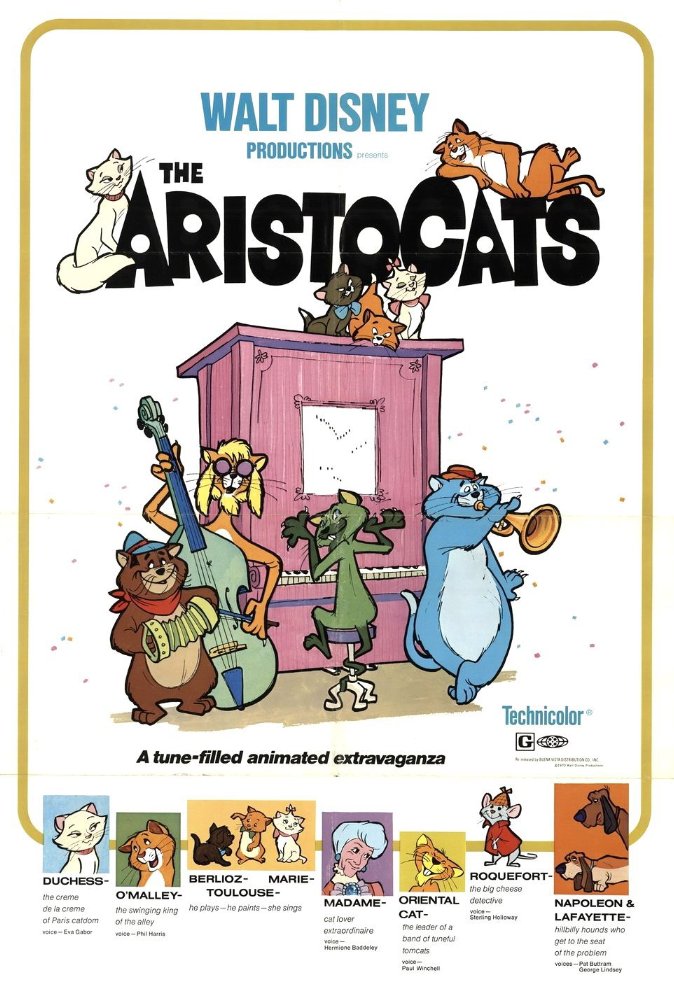 Plot: When Madame Adelaide Bonfamille leaves her fortune to Duchess and her children (Bonfamille's prize family of domesticated house cats) the butler plots to steal the money and kidnaps the heirs, leaving them out on a country road. All seems lost until the wily Thomas O'Malley Cat and his jazz-playing alley cats come to the Aristocats's rescue.

Rather thin on story, but charming in just about every other aspect.

One of Disney's most bland films. It's just not that entertaining.

Everybody wants to be a cat

One of the lesser known Disney titles. The Aristocats mixes some superb animation with some very cool music. Duchess (voice of Eva Gabor) is the well polished single mother cat of three little kittens. When their owner, the wealthy elderly woman known as Madame Adelaide, realizes that her time is running out she decides to write up her will, leaving everything she has to her cats, which will then go to her butler Edgar when the cats pass on. Edgar overhears this and is deeply offended by the idea that the cats would get everything before him, and plots to destroy Duchess and her kittens; he drops sleeping pills in their supper one night and then leaves them stranded in the French countryside. Out of their element, Duchess and her kittens befriend a street smart stray cat known as Thomas …

Top Films of 1970 by Neobowler

No posts have been made on this movie yet. Be the first to start talking about The Aristocats!