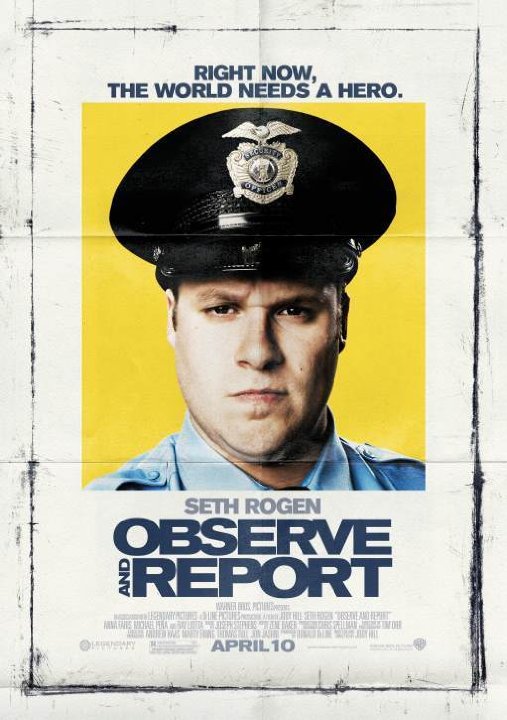 Plot: A mall cop protects his territory with an iron fist, combating skateboarders, shoplifters and unruly customers. Yet he aspires to be a real cop - and to impress Brandi, the attractive make-up counter girl who doesn't know he exists. When a flasher begins to harass the mall, he sees his chance to impress everyone, and win the girl and a badge... until a detective shows up to steal his thunder.

This movie didnt leave me with much to say. It was, blah.

Occasionally a movie dares to go someplace new that no film has went before; Observe and Report is a perfect example of this. This movie breaks pretty much every possible film taboo. This comedy movie is filled with violence, controversy, and ridiculousness. I personally respect and love this movie, but Observe and Report isn't designed to be a crowd pleaser with all of its controversies. If you want a hilarious comedy movie with a completely unique, original, and unpredictable story filled with violence, drugs, and every other taboo, you may also love this cult gem.

Didnt find it funny the 1st time I watched it so I watched it a 2nd time.The 2nd time I just couldnt sit through the whole flick.The best & most funniest thing about this movie was the flasher & the ending I did NOT see coming

Observe and Report, a Mr. E Movie Review
(Run time: 86 min. - Directed by: - Jody Hill Starring: Seth Rogan, Ray Liotta, Anna Faris)
The ever so popular Seth Rogan has a new movie out on DVD named Observe and Report. Now, even when I saw the previews a few months back I said to myself, "I'm going to wait and see that on DVD." And boy am I glad I did, I think. I mean this movie is what Paul Blart Mall Cop would've been if it was incoherent, unentertaining, and a serious disappointment!
Seth plays Ronnie, the unreasonable, "I take my job way too serious", head of security for the local mall. After a pervert wreaks havoc, flashing the female patrons in the malls parking lot. The real cops are called in to officially handle the investigation, enter Ray Liotta. Ronnie's offended. But, when …

No posts have been made on this movie yet. Be the first to start talking about Observe and Report!