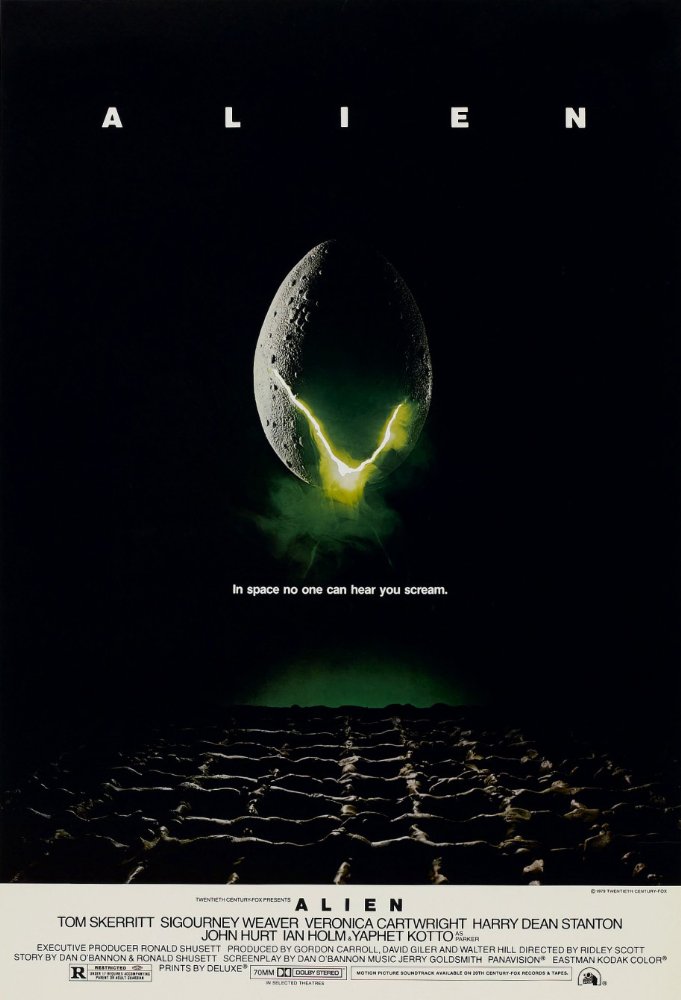 Plot: A space mining ship investigates an SOS on a distant planet. The crew explores and finds a creature?s hive colony and when one of the eggs is hatched the crew has to fend for their lives. The movie stars Sigourney Weaver.

Pioneered the tech-noir genre, and has remained a one of a kind sci-fi classic with tension and effective build-up.

I am easily an Alien is far better than Aliens person after all.

No one can hear you scream in space.alien. okay is this movie good or Bad well I can say it is good.this film as good visual effects and good score.

It's suspenseful! It's scary! It's Alien!

I saw this film for the first time a couple of hours ago, so don't judge me.

I personally loved Prometheus. Other raged about the film because it wasn't the prequel to Alien that they wanted. I personally had never seen any of the Alien films, so I went in completely blind and didn't view it as a prequel, but as an original science-fiction film by visual master Sir Ridley Scott.
Let's start with the negative: I think the weak point of this movie is the pacing. They spend waaaay too much time in the beginning, spanning almost a third of the movie's runtime to get things going. They have a designated length, and they could have filled it with something to help the story, but instead we got half an hour of computers whirring. At least we got to know the …

The crew of the commercial towing vehicle Nostromo investigate a signal from an unexplored planet and unwittingly unleash a hostile organism.

Once again, Ridley Scott creates a totally believable future environment in an object lesson to gore-obsessed horror directors everywhere; he uses suspense and atmosphere to gain the desired effect and less is most definitely more. Considering the "alien" is essentially a stunt man in a rubber suit, Scott's use of lighting and sparse screen time for the creature makes it far more terrifying than a hundred CGI monsters and his employment of an element of sexuality to the attacks on the crew creates a sense of anxiety on many levels; the victims are not only attacked, but violated in various ways in a way that is never exploitative or …

Alien.
Originally entitled 'Star Beast', the film Alien follows the hideous escapade of the crew of the spaceship Nostromo. After landing on an alien planet, one of the team is attacked by a mysterious and monstrous entity which has attatched itself to his face. After some time, and after a hazardous experiment in which a medical crew tried to remove the creature only to find it has acidic blood, it falls off, dead. Soon after, the infected crew-member dies in a bloody display as another monster bursts from his chest cavity and slithers away. After much deliberation, it is decided to hunt he fiendish creature, but to the crews horror, it has grown into an adult in less than a few hours. The alien Xenomorph then proceeds to kill the crew as they try to hunt it, save for Ellen Ripley, who …

No posts have been made on this movie yet. Be the first to start talking about Alien!