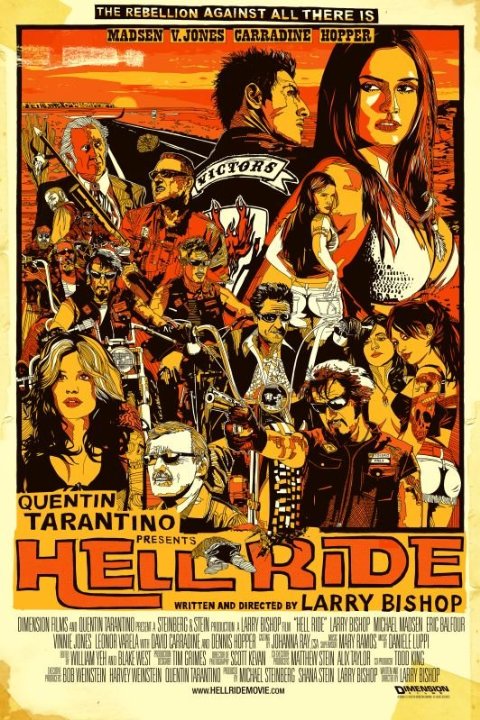 Plot: Larry Bishop stars as Pistolero, leader of the biker-gang known as "The Victors," who along with The Gent (Michael Madsen) and Comanche (Eric Balfour), hit the road to avenge the death of Pistoleroâs old lady Cherokee Kisum (Julia Jones), by the deadly rival gang the "666ers." Vinnie Jones and bike riding legend also David Carradine star as members of the satanic biker gang. -- Supercrum

A somber, confusingly-plotted biker movie with a decent cast that doesn't know what it wants to be; the comedy lacks punch, the drama lacks interest, the action lacks excitement and one is never sympathetic to its badass characters or remotely entertained. Final Grade: D+

Larry Bishopâs homage to 60âs & 70âs biker exploitation flicks, âHell Ride,â starts strong yet wheels itself into the realm of not making a whole-hell-of-a-lotta sense. The dialogue tries hard to be clever but often comes off as rudimentary and green. The aforementioned Bishop, who also stars in the film, is attempting to be that of a wise biker-gang leader albeit prowling sex-god, yet old high-school gym teacher with scoliosis is more than fitting. What does work for this film are the aesthetic visual effects and the campy, lack-luster tone. You will no doubt find the sex, drugs, violence and testosterone enjoyable, but the true killjoy is watching the film try to decide weather it wants to be serious or over-the-top. In the end, this movie really wants to be Kill Bill yet it …

My favorite List of all the time by JAT

Movies I Own by bhambaron

No posts have been made on this movie yet. Be the first to start talking about Hell Ride!