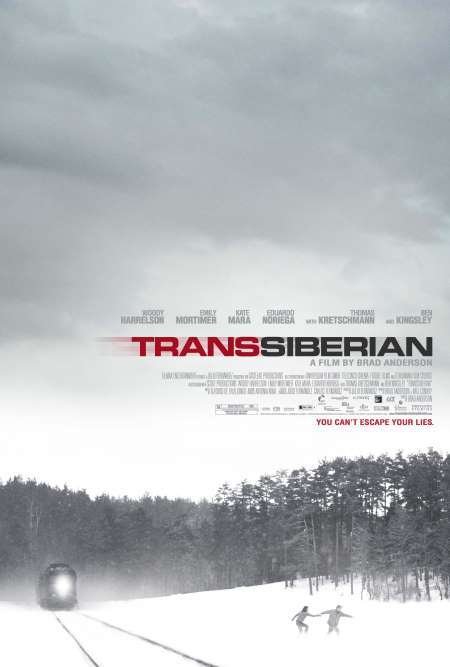 Plot: A couple travels across the frozen tundra from China through Russia when they encounter an odd traveling couple much like themselves. But their lives are twisted when a murder occurs and everything does not appear as it should.

A taut crime thriller with some familiar faces - long before they got famous enough to headline a major movies (other than Kingsley). It's a slow build, but you really feel the characters - especially good turns from Emily Mortimer and Kate Mara here - it's winter here now, and the the cold works in the film just as well as it does outside the window. While it does take elements from several other mystery thrillers, it stands up well enough on its own and has a nice kicker of an ending.

It was alright but not something Id watch more then once

I have been on a strict diet of Indie films for the past few years now and compared to most overblown Hollywood thrillers, this underrated and under appreciated film is hands down one of the best films of 2008. Woody Harrelson, remember him? Woody blew me away with his acting in this one, a far cry from "White Man Can't Jump". He plays a train loving naive husband to a tee. Ben Kingsley as the KGB agent was too good to be true, there were scences that scared the hell out of me for days. This thriller is in the mold of the best Scherlock Holmes novels, a must see!

A married couple travelling on the Transsiberian Express meet with a pair of fellow travellers and their journey takes a sinister and murderous turn. Brad Anderson was responsible for the - in my opinion - overrated The Machinist which was notable mainly for the intense performance of its star Christian Bale. Thankfully, in the interim Anderson has learned a little directorial subtlety and his cunning use of misdirection constantly plays with your expectations of where the story will take you next; in the slow burning build up, you are never quite sure who is the villain and who the victim. Ben Kingsley once again provides some strong support as a coldly intense drug enforcement officer and Thomas Kretschmann's heavy of few words is suitably intimidating, but the star of the show is …

Snow is everywhere in pretty much every scene and it made me feel cold just watching it. Half-way through the picture, I realized that the weather is not just a tool to establish a mood. When I look back on it, itâs really neat how much influence the ice has over the characters. I also liked that it took its time to establish the main characters and the fact thereâs no archetype villain in the film. As a result, the characters are that much more complex and interesting. Theyâre just being themselves but their interests happen to collide and thatâs when the conflict starts. The show-stopper here is Emily Mortimer. Like in most of her movies, sheâs a seemingly timid woman who possesses a silent power which helps to carry her through with whatever is thrown at her. One minute …

Movies from 2008 I've seen by Corndog

No posts have been made on this movie yet. Be the first to start talking about Transsiberian!