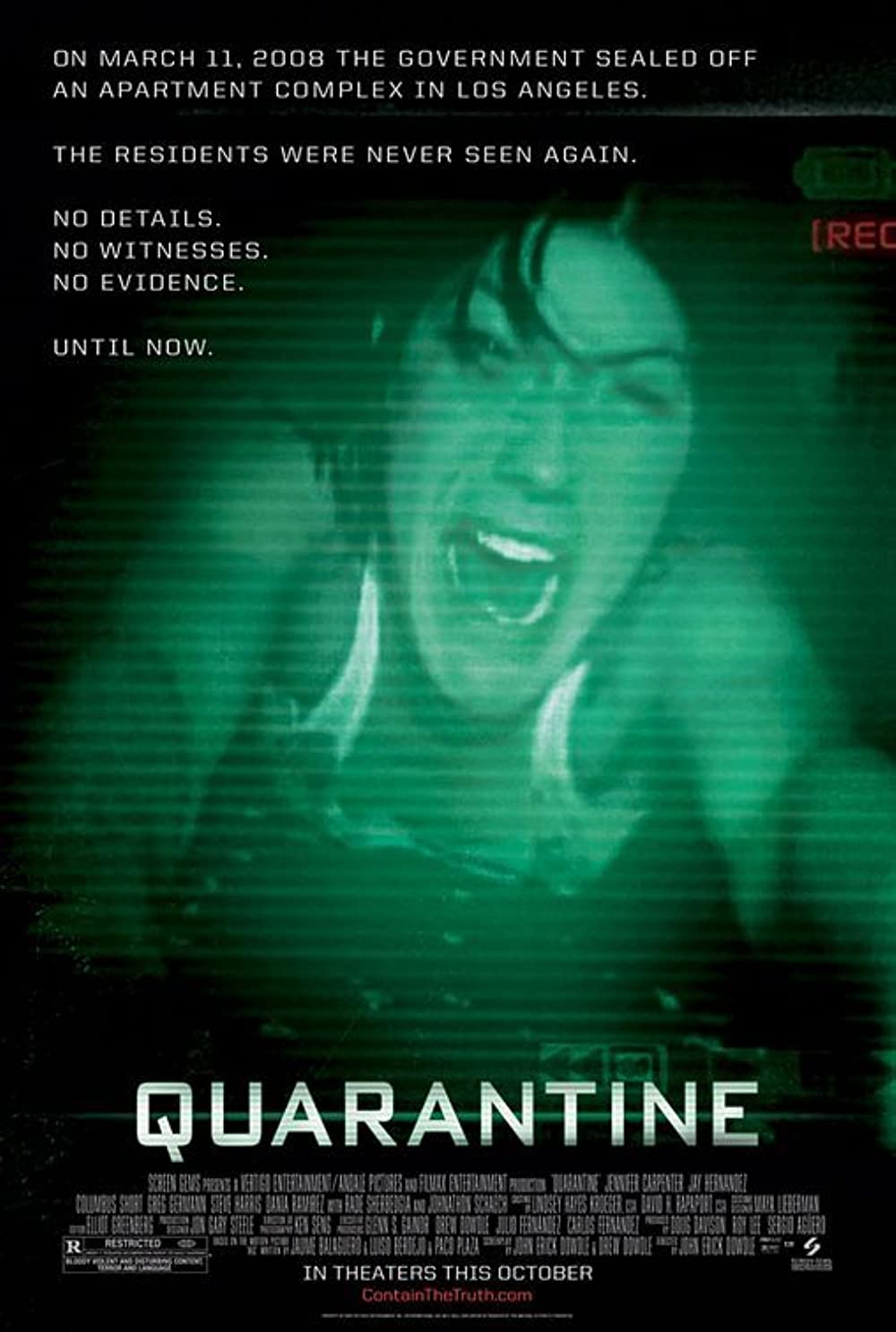 Plot: A reporter and her assistant are sent to a Los Angeles fire-station to research their ways. On an emergency 911 call they here a mysterious scream. What they later find out is that her scream was caused by a mysterious disease. As they try to escape, they realize that authorities have quarantined the area. When they uncover the mess, all that is left is the documentary tape.

If I was they i will drop the camera and run. The story is about a reporter and her assistant are sent to a Los Angeles fire-station to research their ways. On an emergency 911 call they here a mysterious scream. What they later find out is that her scream was caused by a mysterious disease. As they try to escape, they realize that authorities have quarantined the area. When they uncover the mess, all that is left is the documentary tape. The original version (Rec) was way better then the remake. The characters are not realist and the found footage thing is getting old.

It was a good movie but I could predict everything that was going to happen. There were some logical issues but I'm not going to critique that too much because movies can't be 100% logical. It was pretty scary though. The zombies were scary, cudos to the makeup artists! I have yet to see Rec so I can't compare the two movies. This movie was good though. I would definitely recommend it to anyone who wants to be scared on a Friday night.

I am surprised that this didn't do better at the box office. The creepiness of it for me was in the realism of he situation. Very cool and very interesting.

Awfull. Never have I been dissapointed as much as seeing this film. If you are scared watching this film you have not seen any proper horror films or lived reality also. Zombie films do fit a certain criteria yes but this film lacked anything that could make you jump or scared and the acting was horrible. Waste your time if it is a free show otherwise save your money. My wife after seeeing the acting of the reporter wanted her to die so did I. The movie made the premise of a disease that shut down the building . How many zombie films in thepast 5 years just say its a zombie film. Horrible writing for a screnplay trying to run on the tailcoats of other zombie movies, yes they made money on this film because the whole setting was in one building, get some originality.

This movie genuinely scared me. It is comparable to â28 Days Laterâ and â28 Weeks Laterâ because of the zombie-like creatures that are fast and extremely menacing; âCloverfieldâ comes to mind because the entire picture is seen through a hand-held camera. Despite the content of the film, without Jennifer Carpenter (âWhite Chicks,â âThe Exorcism of Emily Rose,â âDexterâ), this movie probably wouldâve failed. Providing a character thatâs real, good-natured, and one of the boys (established during the amusing first fifteen minutes), we ultimately care about her when the creatures roam about the apartment complex. She really amazed me during the last few scenes because not only can she scream and look good doing it, I wanted to reach out into the screen and help …

Even though Quarantine starts up slow it does what it was suppose to do when it reaches maximum overdrive. The fear in everyone's eyes is just genuinely real. My only complaint was Jen Carpenter&#8217;s acting which were sometimes too over the top but then I guess it worked out just fine with all the mayhem going on around her. The pacing was slower than usual at the beginning you would think you'll fall asleep if you're not paying attention. Also the plot's quite murky which is a bit of a letdown because I for one would like to know what's going on. At the end of it all everything was just blurred and dark like the plot. And having that mystery element was probably the best thing that ever happened to this film. Overall if you like Resident Evil&#8217;ish type of movie with a brush of …

No posts have been made on this movie yet. Be the first to start talking about Quarantine!