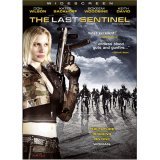 Plot: After the drone wars are over and mankind has lost, a few fight to take back their lives. Only Tallis, a genetically enhanced super soldier, can take down the drones and save mankind. -- Josh C

As far as action movies go, this one is pretty decent. Tons of explosions, fire fights, hand-to-hand combat and a hot woman sidekick. But even with all these things the plot is pretty thin, acting is mediocre and there was an annoying talking gun throughout the entire movie. The talking gun was meant to be an intelligent combat guidance system but was just annoying as the movie went on. The movie had the feel of watching a video game cut scene, which is not something you would want to do for 90 minutes. If you love mindless action films this may be a good movie for you, but movies like "Soldier" or any Rambo movie are more entertaining and have just as much action.

No posts have been made on this movie yet. Be the first to start talking about The Last Sentinel!