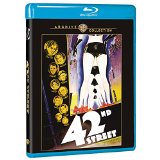 For those who love anything Broadway, "42nd Street" is a must see.

Not as good as some of the other musicals. I don't know if you've seen one Busby Berkeley musical, maybe you've seen them all. Sure the choreography is amazing, but I'm not that into dancing films. I expected the story to be less thin.

Top Films of 1933 by Neobowler

No posts have been made on this movie yet. Be the first to start talking about 42nd Street!