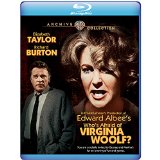 Plot: An aging couple who often fight use their guests as tool to piss the other off in a life long battle with their marriage. Based on a play.

A focused and excellently acted true classic about a dysfunctional marriage.

Incredible and unbelievable word fight and intense emotional moments based on the most common defects and weaknesses of the human condition, represented by a dysfunctional marriage and a formal party resulting in disaster. Mike Nichols' best. 95/100

I only gave this 2.5 star, because this type of film, just isn't my cup of tea. However, it's quite powerful. It will make you appreciate everything that you have that is normal in your life. Although, one could ask, "just what is normal?" The film is quite hard to watch, seeing 2 people do nothing but yell and scream at each other, and then drag 2 others into the mix is just not very satisfying. Elizabeth Taylor is amazing as Martha, in fact, all of the acting is great.

Who's Afraid of Virginia Woolf?

I can't say enough good things about this movie. My roommate, Jesse, has been trying to get me to watch it for awhile, but I'm never in the mood to sit down and watch something old and depressing. He finally just turned it on one night and I was completely hooked. The screenplay (originally a play, I believe) is one of the tightest, most brilliant pieces of writing I've ever witnessed. The acting is incredible, and all four of the main characters should have won Oscars for acting (the two women did). Movies today don't understand "fucked-uppedness" like the good old days. Or maybe just like Mike Nichols does. The impending doom you feel in films like The Graduate and Virginia Woolf are overplayed today. Only Todd Solondz has achieved something similar in Happiness, in later years. Wes …

This film is unpleasant and goes into those categories of films of hateful people trying to be as hateful to each other as possible. It does work as one of those films well I suppose, although who really wants to watch this, Some people I guess, I have no desire to see it again it is just unpleasant to behold, there is not a single uplifting element in it other films like this can have one this doesn't. I believe it to be well made but you watch it if you want to, you won't enjoy it but you might find it interesting I suppose. i found an ability to watch it by seeing it almost as two evil villains trying to get each other, and does kind of play that way.

I understand why Elizabeth Taylor got the Best Actress Oscar for this film but I did not find the story absorbing. I'm afraid this is too stage-play for me. Maybe if I saw the play prior to seeing the movie, I would have liked it better. Perhaps if I had some kind of background regarding the story, I would have been more interested. Who knows? Everyone is over-acting, which was entertaining at first, but it got tiresome after thirty minutes of bellicose bantering. I did like the dialogue because it was sharp at times but I'm afraid the story did not clear up or answer some of the questions that have been lingering in the audience's minds. For instance, the last scene would have been stronger if the existence of a certain person was clarified. The running time is unreasonable because more …

Top Films of 1966 by Neobowler

Movies of 1966 by Stoney McStonerson

No posts have been made on this movie yet. Be the first to start talking about Who's Afraid of Virginia Woolf?!