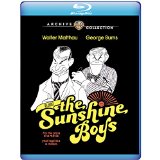 Plot: A vaudeville duo agree to reunite for a TV special, but it turns out that they can't stand each other.

No posts have been made on this movie yet. Be the first to start talking about The Sunshine Boys!