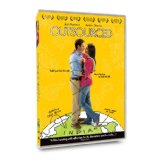 Plot: Todd's entire department is being outsourced to India and the company has asked him to go over and train his replacement. Cultures clash before Todd finally learns to except India and falls for one of her women in the heartwarming comedy.

I read the synopsis of this story and thought it sounded interesting. I started watching it with no idea what I was getting into and it pleasantly surprised me. Todd must go to India to train a new call center that his company has outsourced there. While he is there he clashes with the Indian culture before learning to embrace and love it and a girl. The clashing of his american ideals with the Indian culture creates some funny moments and some lovable characters. All in all I would say this is worth renting if you have some time on your hands. Don;t move it to the top of your Netflixs queue but don;t let it fall to far either was fun to watch.

Quirky and/or Interesting by Carrienj

Movies I Own by juicybrains

To Watch by Istra

No posts have been made on this movie yet. Be the first to start talking about Outsourced!