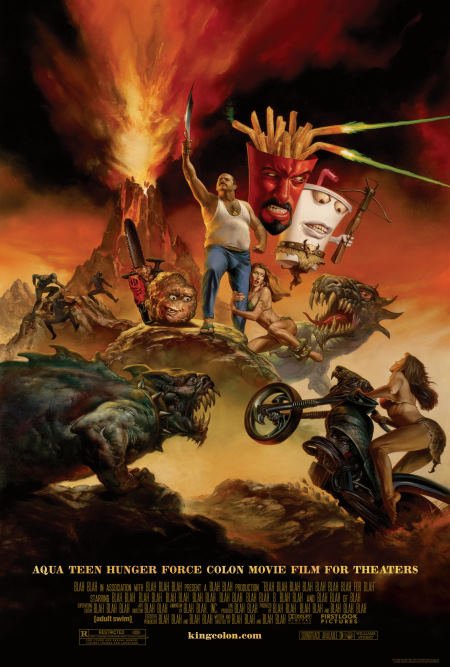 Plot: Where the "gang" came from is explored in this animation when they argue over exercise equipment.

If you are a fan of the series, then you'll be right at home. That is th main problem, though. It IS an 80 min episode of the show. The reason the show actually works is because it's so short. The no plot, random and bizarre joke routine can't sustain the length of a feature film. With that said, there are a good enough amount of laughs here to warrant a viewing.

In conclusion: Holy crap halarious. Meets all the expectations of ATHF and more. Tons of twists and turns, and tons of laughs. The music for the movie was incredible, with it all being original. Not one part I disliked of this movie. My favorite part is anything with the Cybernetic Ghost of Christmas Past. My overall rating, 9.5/10.

I don't normally watch the TV show but I still somewhat enjoyed this movie. Even though it was incredibly random at times, there were moments of stupidity that were genuinely funny. There wasn't really a story, which strangely enough, I found refreshing because most animated pictures I've seen had some sort of an emotional core. With this movie, it's just one goof after another, to the point where the filmmakers weren't even trying. Of course, the randomness could only last so long so I inevitably grew restless after the first forty-five minutes. I think this is the kind of television show that should remain so because it's not deep enough to garner interest for an hour and a half. I found its humour bona fide and its comical techniques somewhat effective, but I can't quite recommend it …

Movies I Want by Chris Kavan

No posts have been made on this movie yet. Be the first to start talking about Aqua Teen Hunger Force Colon Movie Film for Theaters!