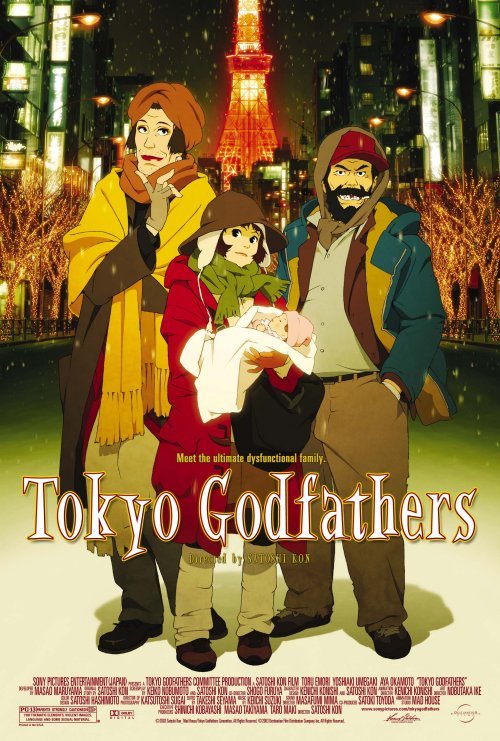 Plot: On Christmas a group of homeless outcasts in Tokyo find an abandoned child. They band together to care for it, but who does it belong to and how could anyone abandon a baby at Christmas? -- CJP

Freaking hysterical. This movie is awesome, I had the rare pleasure of seeing it in a theater. It's about a homeless drunken bum, a transsexual who claims the bum as her own, and a run away girl. The queer claims the child and they go on a crazy adventure to look for the mother and ask her why she would leave a helpless child alone..

Action: 1 / 3, Comedy: 1 / 2, Good vs Evil: 1 / 1, Love/Sex: 1 / 1, Special Effects: 0 / 1, Plot: 1 /1, Music: 1 / 1 = 6/10 or 60%. Tokyo Godfathers is the story of society's outcasts who find an abandoned child on Christmas. They take in the child and scrounge up what food and support they can. While the idea and conceptual theme is that of the classic Christmas story it is also an essay on the humanity and kindness lost to witness through poverty and alternative lifestyles. The outcasts are a struggle to find high regard for, despite their unselfishness and kindness, which makes the characters a little too small for the big britches of the themes.

Like âMillennium Actressâ that was also directed by Satoshi Kon, âTokyo Godfathersâ feels like ordinary story on the outside but has something extraordinary within. Itâs about three homeless peopleâGin (Toru Emori), a father who lost his family, Hana (Yoshiaki Umegaki), a maternally-obsessed transvestite, and Miyuki (Aya Okamoto), a young runaway too ashamed to return homeâwho find a baby in a dumpster during Christmas Eve. After deciding that theyâll return the baby to its parents, they learn so much about themselves and each other. I liked the fact that this film does not shy away from using coincidences to get an emotional reaction from the audiences. To me, it didnât feel distracting because thatâs how life is sometimes: a series of coincidences that reminds and …

My trips to the cinema 2010 by Maxine the Movie Gal

No posts have been made on this movie yet. Be the first to start talking about Tokyo Godfathers!