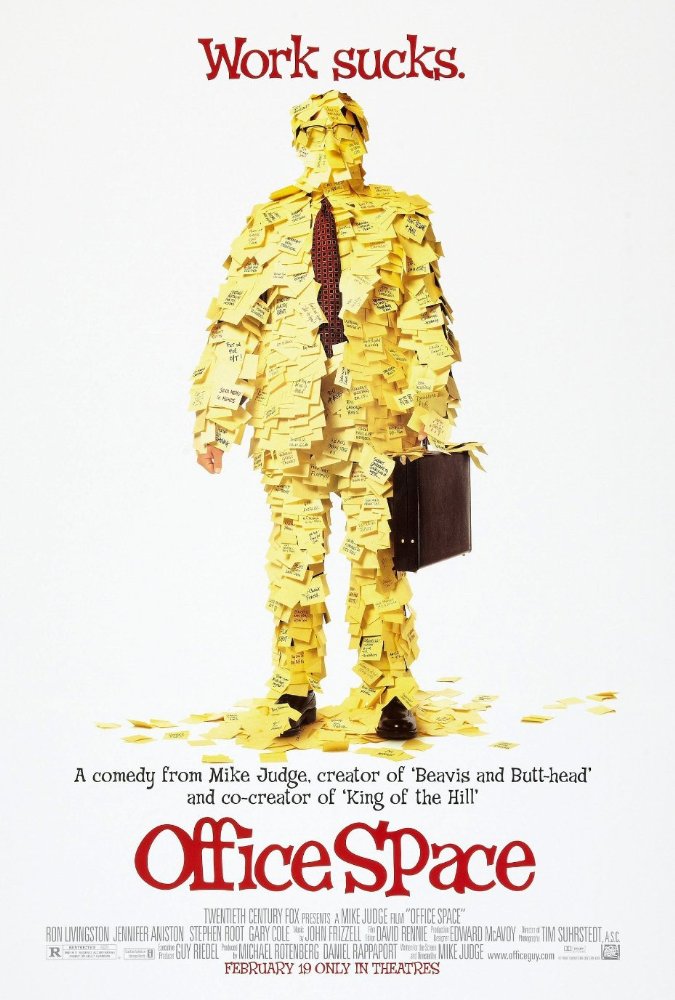 "Office Space" is a hilarious tale of one man's frustration with working in an office cubicle. Anyone who has ever worked in an office will find something to relate to in this movie. Although it was never a box office hit, "Office" has gained quite a following over the years due to its clever dialogs, quirky characters, and true-to-life situations that we've all experienced while working in an office. Ron Livingston does an outstanding job as the "everyman" Peter Gibbons, who constantly rants about how much he hates his job, his boss, and his life! The lovely Jennifer Aniston is charming as Peter's love interest Joanna, who has her own share of work-related frustrations as a waitress in a "crap food" restaurant. Gary Cole is absolutely hilarious as Peter's passive-aggressive boss Bill Lumberg, who gets on Peter about his "TPS Reports" and asks him to work on the weekends. Also hilarious is Stephen Root as Milton Waddams, the "weird guy" at the office who mumbles a lot and has a hard time standing up for himself. Other notable performances include Diedrich Bader as Peter's happy-go-lucky neighbor Lawrence, David Herman as the disgruntled co-worker who has the same name as Michael "That No-Talent Ass Clown" Bolton, and Ajay Naidu as the foreign guy at work whose name nobody can pronounce. This is a very enjoyable movie, especially after a long day at the office.

I loved this film so much I even have a Petter Gibbons Bobble-head. Milton is a scene stealer hahaha. Great review!