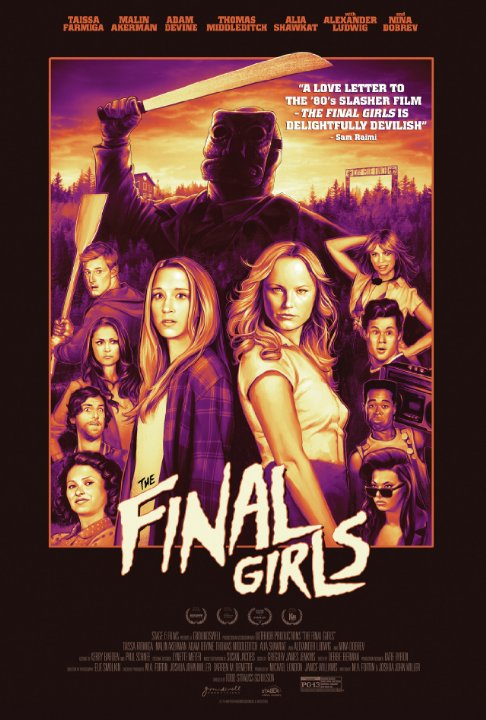 Comedy/horror is a mix that I've seen a lot of in recent years. It seems like every aspect of the horror movie genre has been lovingly parodied in some form or another. What makes 'Final Girls' stand out from the rest is it's mix of creative genre twisting with a straight-forward, and surprisingly heartfelt story. The characters find themselves stuck in a 'Friday the 13th' ripoff that they were previously watching. They have to utilize all the slasher movie tropes to their advantage in order to survive. Meanwhile, we have a strong emotional center in the mother-daughter relationship. This trippy metafiction piece involves the film's female protagonist interacting with the character that her mom played in this fictional movie more than twenty years prior. They confide in each other and form a believable strong bond. The girl's emotional reaction in wanting to save her "mother" is conveyed with the upmost sincerity. And it is earned. I appreciated this greatly. It's not often you see this kind of care put into the characters of a horror, comedy, or comedy/horror flick. The rest of the film is focused mostly on the humor. There's much satirization of the 80's slashers, but it never goes so far as to become a complete deconstruction. Great dialogue leads to some memorable one-liners. Many new creative situations keep the jokes fresh. I laughed consistently throughout. It's clever without being in your face about it. Things are just there to be picked up on if you notice. The kills are sometimes unexpected and funny, but never bloody or over-the-top. Their comedic effect feels justified for the PG-13 rating. The rating does not hurt the fun whatsoever because it definitely feels as if it was intentional from the start. It goes to show that you can have a smart, engaging, hilarious, and fun homage to slasher movies without all the gore. This movie was a nice surprise. I highly recommend it to anyone, including non-horror fans.