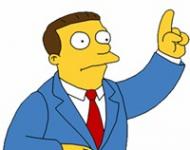 You know I expected it to be very bad and while I can't&nbsp;say I liked it, I can say that there is a decently funny chemistry between Nicholas D'Agosto and Eric Christian Olsen.&nbsp; I&nbsp;think I might actually like to see them paired again with some more intelligent, classy material.http://fandom-film-review .blogspot.com

This looks terrible.&nbsp; No one will see it. (well a few poor souls)

Are you serious or joking?!? Aside from Napoleon Dynamite (IMO)&nbsp;these "Mormon" films have really sucked. On the plus side, the mormons have Pepsi (but can't drink caffeine).After the movie below was released though, in which it shows that African or "Black" peoples are the result of "sin", I won't drop a single penny to encourage a "religion" which claims such a blantant prejudice. I know that the Mormon religion tries to cover this up, but the Mormon church funded and put it on film. Inexcusible and I encourage others NOT to watch films that support racism.Book of Mormon Movie, Volume 1: The Journe...