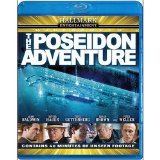 Plot: A sinking ship full of vacationers try to survive with no way out as they crawl through an upside down ship.

This is a movie I have loved since I was a kid. Skip the first ten or fifteen minutes of the movie though and go straight to the New Years Eve party. Great story of survival, great acting and I think good effects for a film made in 1972. One of my all time favorite guilty pleasures. Avoid remake at all costs.

A very intense and enjoyable adventure thriller. Unlike the remake; this delivers some extraordinary performances by Gene Hackman, Shelley Winters and Ernest Borgnine.

Movies of 1972 by Stoney McStonerson

No posts have been made on this movie yet. Be the first to start talking about The Poseidon Adventure!