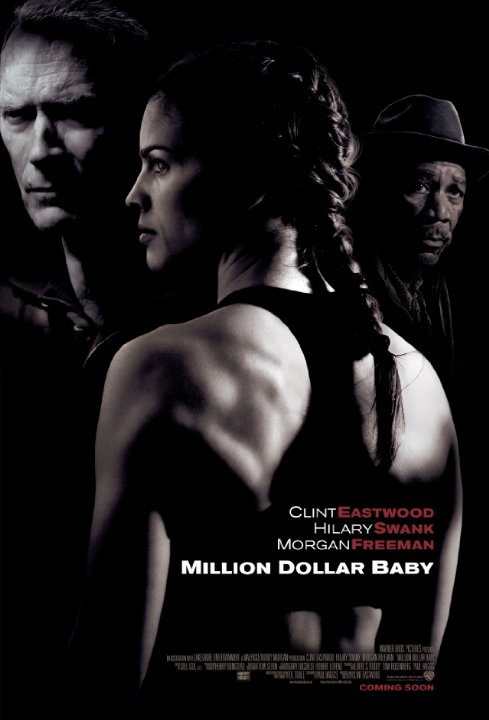 Plot: An old hard nosed trainer who owns a gym tries to discourage a woman boxer from boxing. He is finally convinced to train her and helps her to become one of the best female boxers.

Although it might look like nothing more than a darker, female-lead version of "Rocky," this boxing drama is a heavy-hitting redemption tale and portrait of human fragility.

I'm not typically a fan of sports movies- the clichÃ© phrases, the familiar plot twists, the formula...but I don't know, something about Million Dollar Baby really worked. Apparently a lot of people weren't a fan of the bleak ending but I thought that it was very beautiful and poignant. When asked why the film ended in such a depressing way, Clint Eastwood stated that it was about the American Dream. Something out of reach and wonderful and then given and then taken away.

Takes the typical 'rags to riches' sports premise and leaves out the fame aspect. The characters are endearing for being identifiable types, but presented more off center. The genre parts are enjoyable despite the familiarity. The third act almost turns this into a different movie all-together. Things become emotionally heavy when the main characters are faced with drastic changes that are cause for the hardest life decision.

Clint Eastwood plays a boxing trainer who takes a young woman under his wing and helps make her dream of fighting for the title come true. Million Dollar Baby is not your usual sports melodrama. Although it unashamedly tugs at the heart strings, it does so through well rounded, sympathetic characters and sensitive performances rather than cynical manipulation and empty schmaltz. There is a lot of warmth and humour in the relationship between crotchety old men Eastwood and Freeman, who know each other too well to be bound by the usual social conventions, and Swank makes a fine fist of a young woman who is told she is past her prime but too desperate to escape her trailer trash roots to give up (when you see her family, it is impossible not to root for her all the more). Guilty of …

Frankie Dunn (Clint Eastwood) was never the greatest boxing trainer. He could get a man to fight well, but never to win a championship. When he met Maggie Fitzgerald (Hilary Swank), however, all of this changed in the Best Picture winning film, "Million Dollar Baby."

This film is remarkably similar to Unforgiven in both the mood and the quality of acting (not to mention Morgan Freeman playing an important side character again, Eddie Dupris). Clint Eastwood is a great director. I won't lie. He can get somebody to do his bidding by only saying two or three words. The only problem is that this doesn't work on himself. Eastwood always seems like he spent so much time working on everybody else's acting that he forgot to work on his own. Now that I've gotten that out of my system, I can …

No posts have been made on this movie yet. Be the first to start talking about Million Dollar Baby!