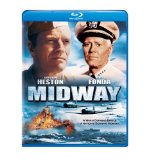 Plot: Dramatization of the famous June naval battle of Midway that pitted the U.S. forces against the Japanese and proved to be a turning point in the Pacific theater during WWII. -- Chris Kavan

Top Films of 1976 by Neobowler

Movies of 1976 by Stoney McStonerson

No posts have been made on this movie yet. Be the first to start talking about Midway!