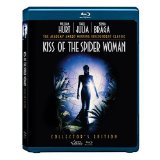 A bleak, but beautiful, story about love and loyalty.

Kiss of the Spider Woman is a film that deserves multiple re watches to truly appreciate the greatness of the film. The entire story and tale is anchored by two magnificent complex performances by William Hurt who very deservedly won his Oscar, and Raul Julia. They both realize their characters and the dynamic of their characters perfectly. It is a moving film they effectively uses its interesting visuals and haunting score. It is a truly special film that is worth watching.

Top Ten Films of 1985 by KingoftheCorn

No posts have been made on this movie yet. Be the first to start talking about Kiss of the Spider Woman!