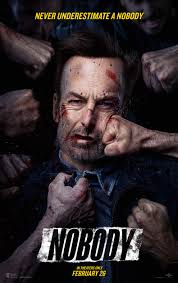 Plot: Hutch Mansell is the perfectly typical father and husband, in a perfectly overlooked life - your average nobody. But things change when he thwarts a home invasion and something inside of him, a simmering rage, finally snaps and causes him to push back. Now in the sights of a drug kingpin he will uncover long-buried secrets and dangerous skills in order to protect his family - and remind everyone he will be a nobody no more. -- Chris Kavan

Who knew Bob Odenkirk could be such a badass action star? Though the film is an obvious wink to the John Wick franchise (with three Wick veterans working on the film, even), it has its own tone and story to tell and Odenkirk does an admirable job of carrying the load. Plus, it's nice to see Christopher Lloyd back in action as well. Overall, an enjoyable action romp that I can't wait to see continue.

Fun riff on the John Wick formula whereby instead of starring a conventional action star like Keanu Reeves, the leading man is comedian and tv actor Bob Odenkirk. Surprisingly he works very well in the part. The action is well shot and bloody. It moves at a quick pace. Plus it gives Christopher Lloyd a chance to shoot a bunch of bad guys with a shotgun.

Of all the "John Wick" clones, "Nobody" is one I can actually recommend. It brings the hyper, suped-up mayhem of the Keanu Reeves franchise while finding a voice and identity of its own, as well as an unlikely yet effective action star in Bob Odenkirk.

No posts have been made on this movie yet. Be the first to start talking about Nobody!