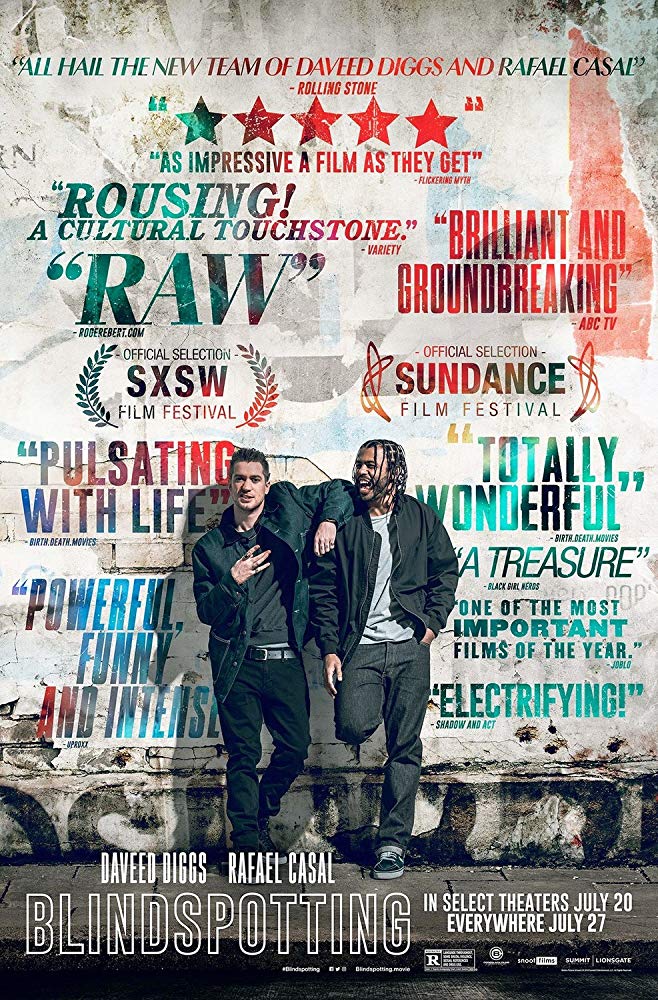 Plot: Three days before his probation officially ends, Oakland native Collin, doing everything he can to keep clean (curfew, avoiding drugs and holding down a job), witnesses a police officer gunning down a defenseless man. This throws his world off balance as he contends with his hot-headed friend Miles and tries to reconcile with his girlfriend, Val. -- Chris Kavan

Some movies about race are harsh ("BlacKkKlansman") while others are touching ("Green Book"). "Blindspotting" is both funny and thought-provoking as it takes on the same ideas as other critically acclaimed films of 2018.

Ladies and gentlemen, we have a cult classic on our hands, and people donât even know it.

âBlindspottingâ does an excellent job at avoiding the force preachy message about race and social issues a lot better than any Oscar bait movie that calls itself âimportantâ. Despite occasionally falling into some cliches in certain areas, but that never interrupts the natural flow that made it feel so real and incredibly terrifying.

The themes of violence, race, cultural, fear and anger - linking in a tight knot that strings elements of modern society. At times itâs funny, like really funny, but can be unnerving when necessary. Itâs got a lot to say and leaves room for discussion. All of this was beautifully presented through the writing/performances …

Blindspotting is a very contemporary film that touches on a lot of real, raw subjects but keeps things grounded by approaching the subjects through the eyes of Collin (Daveed Diggs), who is just coming off a two-month prison stint and is nearly done with his probation period. With just three days left to go, his world is thrown into turmoil when he witnesses and unprovoked police shooting by Officer Molina (Ethan Embry).

The world of Blindspotting takes place in Oakland, California and surrounding areas. Collin and his hot-headed friend Miles (Rafael Casal) work for a moving company where his one-time girlfriend, Val (Janina Gavankar) works reception. The film opens with Miles buying a gun for protection and trying to enjoy the grand re-opening of a local burger joint. From Collin's …

No posts have been made on this movie yet. Be the first to start talking about Blindspotting!