Eye in the Sky Movie Information 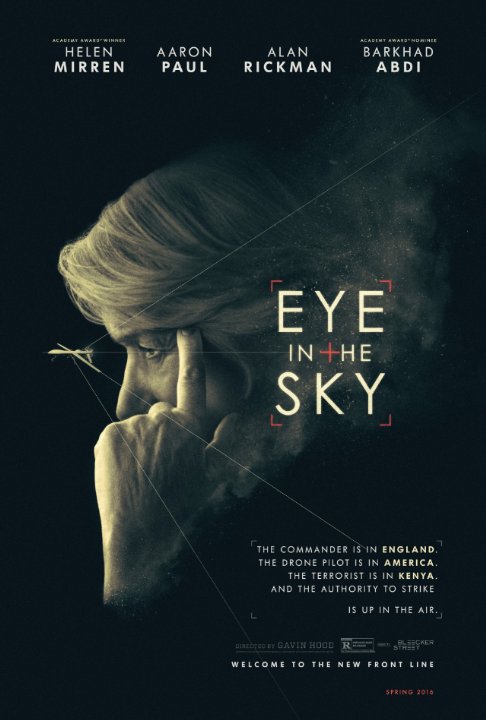 Plot: Colonel Katherine Powell. a UK-based military commander, control a top secret drone program with the intent of targeting terrorists in Kenya. When word of a suicide mission comes down, the project switches from surveillance to a kill order, but as US drone pilot Steve Watts closes in on the targets, a nine-year-old girl enters the scene leading to a dilemma over the moral, political and personal implications of this technological warfare. -- Chris Kavan

Rather than taking a stance for or against the use of weaponized drones, "Eye In the Sky" takes an neutral and understanding look at the subject.

A tight-paced thriller that examines the effects of modern drone warfare from the highest offices to the drone pilots and the innocent bystanders caught in the middle. Standout performances from Helen Mirren, Alan Rickman (in his final live-action role), Aaron Paul and Barkhad Abdi help lend a weight to the proceeding, much of which unfolds in real time. Very tense and raises some very important issues - well worth checking out.

This tightly plotted gem of a spy thriller is so tense and suspenseful, it's incredible! The acting is excellent for most of the cast and the writing does a good job of laying out every single argument and point of view for the situation that happens in the movie.

'Eye in the Sky' is a thriller set in modern day war-times that tackles the issue of drone warfare head on. That's not to say it has an agenda to favor or disfavor this act of strategic elimination. No, it's more focused on the actual gray area that exists in the real-life collateral damage. The film never loses this focus for a second. The plotting is air-tight. We continuously cut between the perspective of all the people involved: the highest ranking officials who debate the issue, the next in command below them who gives the orders, the soldiers who execute the task, and the people on the ground being watched by all of them. Switching between these players never once loosens the tension felt during this realistic scenario. We have a clear understanding of the moral confusion …

Top Ten Films of 2016 by KingoftheCorn

My War Stories by Carol

No posts have been made on this movie yet. Be the first to start talking about Eye in the Sky!