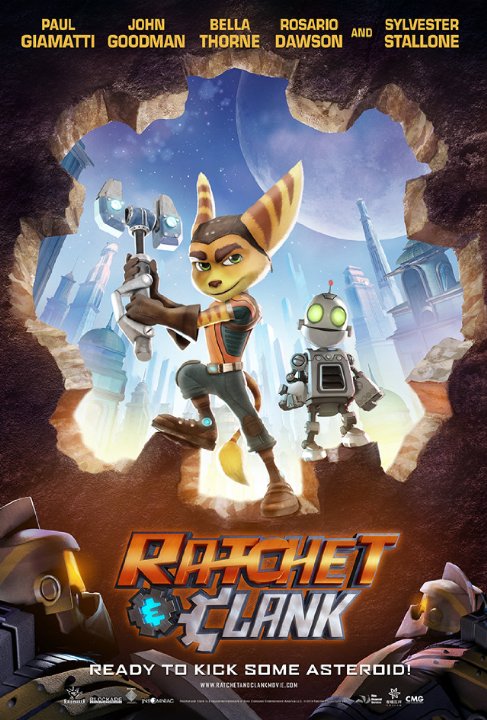 Plot: Based on the hit video game series, Ratchet, a Lombax and his robot sidekick Clank, find themselves facing the vile Chairman Drek, who has a weapon capable of destroying every planet in the Solana Galaxy. The duo will have to join forces with a colorful group known as the Galactic Rangers in order stop him and save the universe. -- Chris Kavan

More Saturday morning entertainment than anything else, "Ratchet & Clank" is a walking, talking, animated clichÃ©.

I liked this, but you really have to be a fan of the game series to get much out of it. There are plenty of throwbacks to the series including the weapons, characters and the voices involved. However, it does work better as a game than a movie and even with some talent involved, it doesn't get much better than a generic animated film with some action and comedy thrown in.

Collection of Nuts and Bolts

'Ratchet & Clank' brings it's title video game originating characters to the big screen. The result is a sub-par action-adventure farce strictly for children. That's not to say it's all bad. The characters are accurately represented as they were in the games. The cheeky humor also stays intact (somewhat). What's missing is a solid story to contain it all. I couldn't tell you much about the plot after just having walked out of the theater. It's entirely forgettable. The main factor in this movie's failure lies here. There's very little present to become invested in. I found myself tuning out the movie a couple of times, only from a lack of interest. Many times the situations would rely on meaningless gags or lame pratfalls. Some throwaway spoken lines are kind of clever in how …

No posts have been made on this movie yet. Be the first to start talking about Ratchet & Clank!