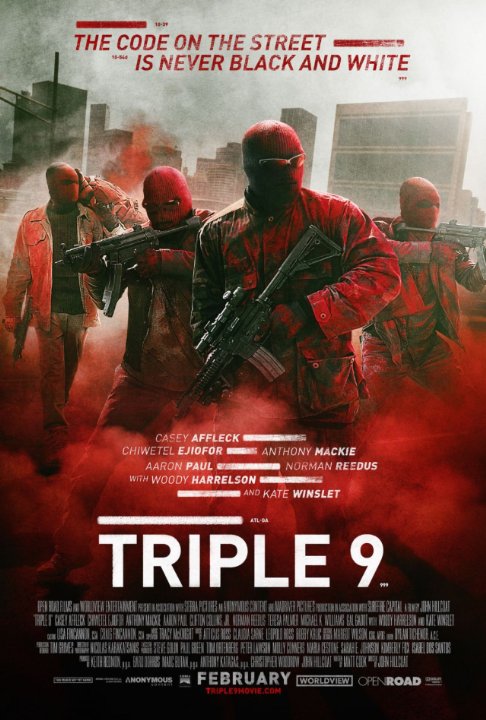 Plot: A group of thieves and corrupt cops join forces to take down an officer in the way of pulling off their biggest heist yet. -- Chris Kavan

It doesn't break any sort of mold, but "Triple 9" is an entertaining enough crime thriller.

A fantastic cast wasted on a film that wants to be as gritty as Training Day and as thrilling as Heat, but is half-baked at best. It's just a pain to see talent like Kate Winslet, Gal Gadot, Aaron Paul and Norman Reedus (in essentially a glorified cameo) ignored for questionable accents and typecasting (Paul is playing a slightly darker version of his Breaking Bad character - and I'm not even going to get into Woody Harrelson). All told, a big disappointment, hard to say worth watching for the cast, even though it's a fantastic lineup.

This crime drama ends up being far less than the sum of its parts. And there's a surprisingly large number of parts played by the star studded cast. Some performances work better than others. Standouts include Woody Harrelson, Chiwetel Ejiofer, Anthony Mackie, and a subtly frightening Clifton Collins, Jr. Kate Winslet employs an absurd accent as a Russian mob boss while Casey Affleck looks lost as usual. John Hillcoat does have an eye for establishing a grimy and gritty atmosphere for his movies which are often crime oriented. Still, style and a who's-who of actors being involved doesn't stop Triple 9 from becoming a muddled and overly dreary viewing experience.

'Triple 9' can raise attention just from it's immaculate ensemble of terrific named actors. The list of greats is staggeringly long. After seeing the film, that really does turn out to be the main draw. I was disappointed there wasn't more to this film than just a routine cops and robbers story - complete with the usual good intentioned career criminals, family squabbles, dirty cops working both sides, and the ongoing threat of gang warfare. All of these elements are done well, but they don't offer anything outside of what we've already seen in so many other movies. I appreciated the realistic violence. The film does not hold back on the brutality of consequence. Direction of the action gives off a tense vibe and a thick layer of grit. You feel the sweat pouring off of these …

No posts have been made on this movie yet. Be the first to start talking about Triple 9!