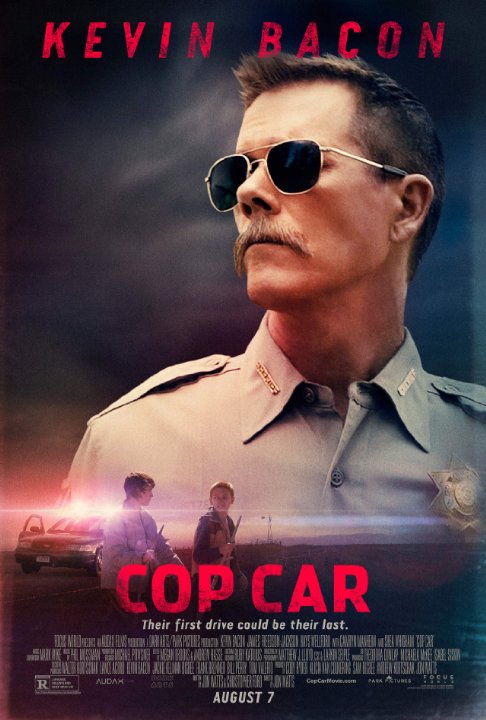 Plot: Two ten years old boys find a cop car and ride it for innocent fun, but the car has a dark secret to reveal that it will change their lives forever. -- Ionut valentin

Jon Watts' "Cop Car" is a tremendous experience; an achievement in authentic storytelling that will remind you of the best coming-of-age aspects of "Stand By Me," as well as the Coen Brothers style of storytelling. The film features characters who are beautifully developed and engage you in a disturbing situation that is brilliantly executed, never forced or over-written. It's a very well realized and naturally told story, which, in my opinion, makes many of the film's unanswered questions feel justified. The directing is fabulous and the climax is impeccably staged, shot, and relentlessly tense. "Cop Car" is a strong contender for "Most Badass Film Of 2015."

'Cop Car' is a stripped-down, simple thriller with realistic consequences. Things start off light and then progressively darken. The two boys are very believable in their roles. They act according to their age. I love when movies do this. It only compliments the realistic shifting tone. The few adults present are shady individuals whom the boys cannot trust, depending on which point in the story they are. We find out their intentions gradually. Nothing is easily foreseen. All of it comes together in an intense finale that doesn't take it's grip from you even after the credits start. Some may be put off by the somewhat abrupt, bleak nature of the ending. I thought it completely worked with the series of events leading up to that point. Danger such as this should not be taken …

Cop Car (2015) R A small town sheriff (Kevin Bacon) sets out to find the two youths who have taken his police car on a joyride. Director Jon Watts, who co-wrote the screenplay with Christopher D. Ford, brings out the best in his cast. The two boys, Welftford and Freedson-Jackson, play well off each other, and Watts lets the boys be boys, as they have a blast driving around in a police car. Bacon is perfect as the menacing sheriff, and we know the instant that we meet him, he is not to be annoyed. This sheriff is certainly someone who will do anything to survive. The film's second half just isnât as compelling or fascinating as the first. The film becomes a cat and mouse game with a very ambiguous ending that is downright frustrating. Overall, the cast and the excellent pace make …

Sounds interesting, I will look out for it and see if I can watch it and let you know what I think.

inteligent, fun, the movie is original. the end is like a poetry's echo: it follows you for some time.