Me and Earl and the Dying Girl Movie Information 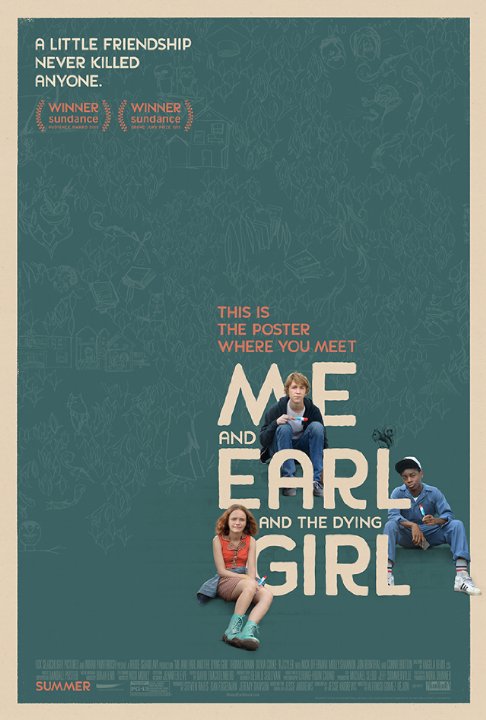 Plot: During his senior year, a classmate is goaded by his mother to befriend a girl who has been diagnosed with Leukemia setting the stage for a life-changing relationship. -- Chris Kavan

Not as bad as Greg and Earl's films, but still pretty bad. Most of the humor totally misses the mark, and "Me and Earl and the Dying Girl" deprives itself of the sincerity that made teen movies like "The Spectacular Now" and "The Perks of Being a Wallflower" so likable, and replaces it with insufferable cynicism and whinny sarcasm.

"Me and Earl and the Dying Girl" is a sweet film that sucks you in through its style and holds your attention (and emotions) as the characters become increasingly engaging and heartfelt. I loved this film. I loved the writing, I loved the performances, the directorial style, the cinematography, and especially the characterizations. It cleverly and uniquely takes you down a path full of surprises. It's touching without ever being too cutesy and it's consistently funny, and when the moments come, "Me and Earl and the Dying Girl" is rather hard-hitting. This is a very good, very well crafted and highly entertaining drama with tons of heart, humor and style, more than a film fan can ever ask for in a movie.

A realistic and wonderful teen movie

This is a beautiful film that gets a lot of things right: the teenage boy who bickers with his nagging mother just like real teenagers do; the cancer-stricken girl who prefers to keep her disease a secret; the teenage awkwardness and self absorption. There are some clichÃ©s to be found, but many common ones are avoided. For example: there's the obligatory hot girl, but she's not a bitch and the main character doesn't pursue her; there's the geeky guy, but he's not bullied -- in fact, one of his chief flaws is that he tries so hard to escape notice that he has neither friends nor enemies. You will see characters and situations in this film that you haven't seen before, and in these days of lazy sequels and remakes that's a rare and welcome treat.

Today is the second day of 2018 and I'm really glad this is the first movie I watch this year. I haven't (yet) read the novel but I bet this film has its own degree of beauty. For a film student like me, I couldn't help but appreciate the "film within a film" element of this. About ten minutes in the movie and I already love the writing, I said "Oh it is based from a novel, I should read the novel." but the thing about this film is it exhibits the part where movies should "show not tell". The emotions were deeply rooted. To date, I don't have a friend so close to me who died yet the friendship which was so true and expressed in the film brilliantly is what I can relate too. At first I thought it would be light comedy with very witty script, but it turned out to be a sort of a …

No need to say that this is a fantastic movie

"I don't need your stupid pity. It's fine, you can just go. No, no. You got it all wrong. I'm not here 'cause I pity you. I'm actually here because my mom is making me. That's actually worse."

There are movies I really could dwell on in a lyrical way. Because it's put together cleverly and cunningly. Or because I could empathize with the characters. Or because the humorous content was taken up throughout the story in a professional way. Call me oversensitive or sentimental. But "Me and Earl and The Dying Girl" is a movie that I'm extremely lyrical about. Firstly, because they tackled such an emotional subject in a very clever and witty way. Without significant effort they could have made a major tearjerker out of it, so Kleenex would suddenly see a miraculous growth of its quarterly …

No posts have been made on this movie yet. Be the first to start talking about Me and Earl and the Dying Girl!