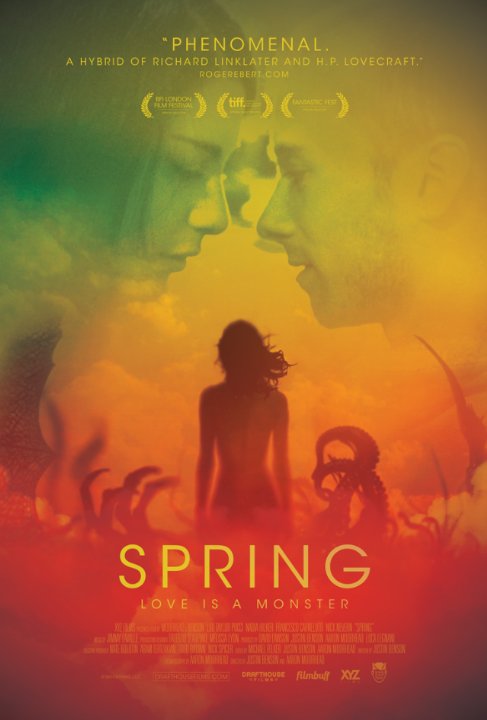 Plot: A young man flees from the U.S. to Italy after some trouble in life. There he meets a young, local woman who is more then a mystery. -- Ionut valentin

"Spring," from directors Justin Benson and Aaron Moorhead, is quite possibly the most unconventional love story you're ever likely to see, and that alone is admirable. Here is a touching, innovative and wholly original movie that blends elements of romance and horror so uniquely, written to absolute pitch-perfection and performed wondrously. It's a beautifully crafted, genuinely compelling commentary on love executed in such a way I've never before witnessed. I think "Spring" is a profound film; a visually breathtaking and thematically rich film that tramples the sappy garbage delivered by Hollywood nowadays. Everything flows tremendously. Nothing ever seems out of place or awkward. It's a perfect little movie.

The setup of 'Spring' is refreshingly un-cliche. This guy has no family left, and not much going on in his life, so he runs away to another country. While there, he becomes a farmer and seeks the affection of a stunning and sophisticated woman. I liked all of this. The slow build-up had me at ease. I enjoyed the scenes of the couple together. It felt natural. That is, until the film's sci-fi/horror element takes center. It had only been hinted at in glimpses for a long time. The air of mystery kept me guessing. Once her weird truth is revealed, I lost most all interest. The rest of the movie is spent giving confusing explanations for her condition and contemplating what it means for their relationship. It all comes down to a final twenty-four hour date that hangs on the …

A subtle mixture of romance,SF and horror

"Iâm half undiscovered science, a bunch of confusing biochemistry and some crazy hormones."

"Spring" isn't really a horror film. It's a rather mythological love story with a "not so bad" twist. A story about how true love can overcome obstacles and how that makes you choose irreversible options. And this interspersed with sometimes lurid and bizarre scenes. There are several moments in this film, which also proceeds painfully slow (the only flaw I could think of), where you are wondering what the hell is actually going on. And when everything is explained in detail, you frown and instantly you think "What the f * ck was that ?". I admit that the whole metabolic explanation went over my head the first time, but after a while it became really clear and I realized it was dead simple. …

No posts have been made on this movie yet. Be the first to start talking about Spring!