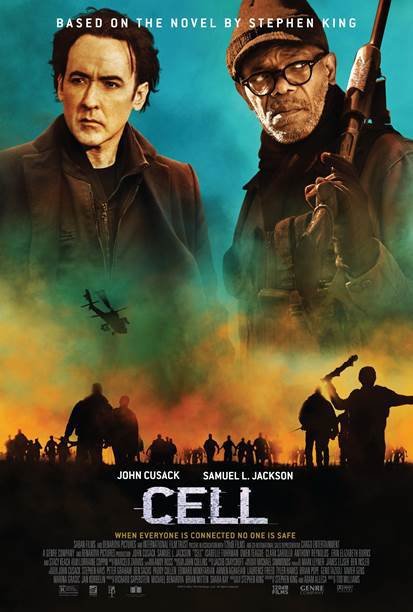 Plot: A mysterious signal pulsates across cell phones nationwide and those affected become a ravenous, murderous hive. In New England, an artist, along with a small group of survivors who have avoided the signal, head north for sanctuary and hopefully to track down the artist's young son. -- Chris Kavan

"I thought when you get older, the nightmares go away. No, they still happen. They just grow up, too."

Aren't you a real Stephen King fan or a zombie fanatic? Best you avoid this film. Something the majority in this movie better had done, when receiving a call. "Cell" is an adaptation of a Stephen King book. And I was eagerly looking forward to this one. Unfortunately I stopped reading halfway the book. Not because it was bad (After all, it's still a Stephen King book), but due to a lack of time. That's the biggest drawback when reading a book. You have to have some free time. And that's just something I don't have unfortunately. The advantage of a book is that the build-up goes gradually, there's room for in-depth descriptions and the characters of different personages can be …

No posts have been made on this movie yet. Be the first to start talking about Cell!