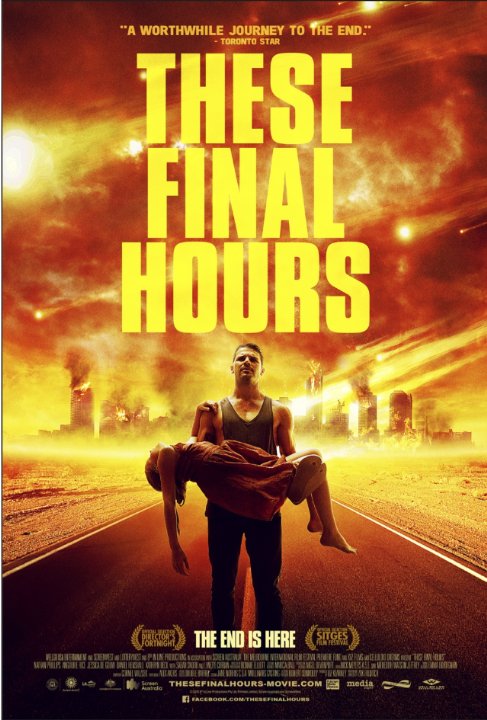 Plot: The world is ending and one young man just wants to go out with a bang at a massive party. But just as about he's ready to give up on life he comes across a young girl, one he saves, and it puts him on a much different path with only hours to spare. -- Chris Kavan

I think it captures exactly what I picture what would happen if you knew the end was coming - maybe a bit too cut-and-dried, but the visual aspect is quite well done. The biggest hurdle in the film is the characters - most of whom are thoroughly unpleasant - but being this is a story about a self-obsessed guy looking for redemption - he's not hanging around with nice people most of the time. For an end-of-the-world flick, it's decent enough.

The colour orange, some nicely edited apocalyptic party scenes, and lots and lots of repulsive and irritating characters; those are pretty much the sum of this sodding film's parts.

Typical, But Not Bad

The human's coping with an impending annihilation drama story is here yet again. So what separates this from the rest? ... It's set in Australia? Yeah, that's basically it. This small film focuses on it's few main characters and their choices on how to spend their last hours alive. Our lead leaves his obvious love to go and be with his actual girlfriend, for reasons I'm still not certain of. He is sidelined into an added quest when he saves a girl and helps her reunite with her father. The relationship between them is the one thing that works best. It's subtle, realistic, and not forced in any way. Their final scene is a bit touching. Easily the highlight of the film. It's the one redeeming factor to the lead character's questionable decision at the start. The narrative works …

To Watch by pinkglitter

No posts have been made on this movie yet. Be the first to start talking about These Final Hours!