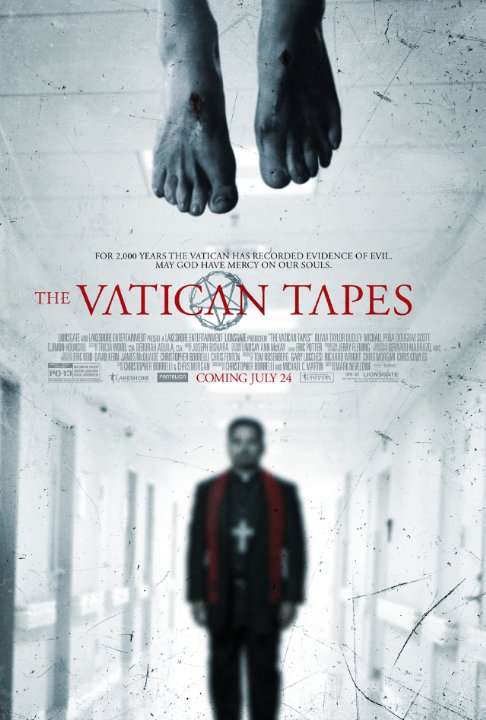 Plot: A young woman begins to manifest powers that have a devastating affect on those around her. A local priest determines she has been possessed and calls the Vatican for an exorcism. But when they arrive they find the demon they face is much more ancient and powerful evil than they could ever imagine. -- Chris Kavan

Hope 'The Vatican' Don't See This

'The Vatican Tapes' is yet another 'possession' horror movie. Seems like there's 5 - 10 every year. The only thing separating this from the rest is it's 'twist' of an ending. At first it seems like a neat surprise, but when looking back at the rest of the movie it becomes a waste. It's not the twist that's good, it's the idea that it leaves us with in the very final scene. This felt like a good setup to another movie. A movie that would've been more original and much more interesting/entertaining than this lame excuse for supernatural horror. There's nothing here that hasn't already been done ten times better in every other possession centered movie. Nothing. It plays more like a dumb farce. But at least it's short and full of stupidly crazy situations.

They Say Possession is Nine-Tenths of the Soul

If you've seen on exorcism movies, you've seen them all (unless it's The Exorcist - which still has no peer). The Vatican Tapes has a few things going for it that distinguishes itself from the herd and makes it rise slightly above the typical exorcism tropes. One, it has a good cast balance between newcomers and established actors that works, for the most part. Two, it uses aspects of found footage (like security cameras and taped interviews) but doesn't over-rely on them and thus doesn't feel like a burden. Three, while most of the film follows a prescribed route, I really liked the ending (unlike, say, Devil Inside where the ending was the worst part). Taken together, The Vatican Tapes may not break any new ground, but it does at least rise above the standard to provide a decent night …

No posts have been made on this movie yet. Be the first to start talking about The Vatican Tapes!