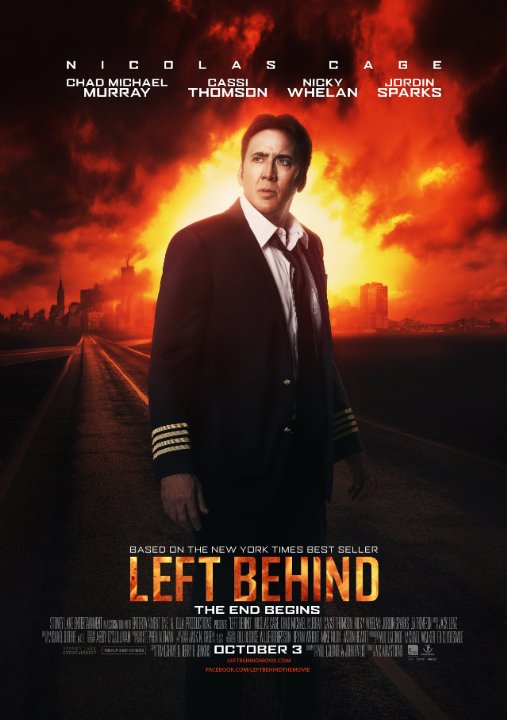 Plot: When the rapture takes millions of people - those left behind must face a chaotic world where death and destruction reign. -- Chris Kavan

Was this movie bad? Yes. But to call it the worst movie ever (or even the worst film of the year) is stretching things a bit. Let's just say that the acting is terrible, the special effects worse and it has questionable "Christian" motives. Still, if you don't take it seriously (please, please don't take this film seriously) it's campy fun - at least that's my view of it. Still, aside from punching out a woman in a bear costume, this is a pretty low point for poor Mr. Cage.

Not as bad as people say

Most critics call this the worst movie ever or at least for the year. but it wasn't that bad nowhere near as bad as people say. This is a movie about a father areoplane pilot and his family and what happens to them when suddenly people start vanishiing which is put down to a act of god taking all the good people and children leaving others behind.
its more like a disaster movie than anything. as people vanish in mid flight including one of the pilots and people in cars etc .which causes all kind of mayhem and problems.
ok its sentimental and a bit corny not that well done. but its really not that bad. ive seen worst films.
i like the idea just wish it was without all the initial family and religious stuff. if they just had it as a normal family normal people then suddenly people …

Nicolas Cage why do you keep doing this? Your a good actor and when you're in the right role to show off you talent it works, but you keep picking crappy movie like this that hides your talent away and make you a joke to the auditions. Nicolas Cage was in this movie that came out early this year called Joe, and now you're in this peace of sh't.

The story to Left Behind is about millions of people - those left behind must face a chaotic world where death and destruction reign.

Ladies and gentlemen, this is the kind of movie that may be the worst movie, not just this year... I mean the worst movie of all time. The acting in this movie was freaking terrible even Nicolas Cage was pretty bad in this film and I hate saying that because as I said before he's a good actor when he picks …

No posts have been made on this movie yet. Be the first to start talking about Left Behind!