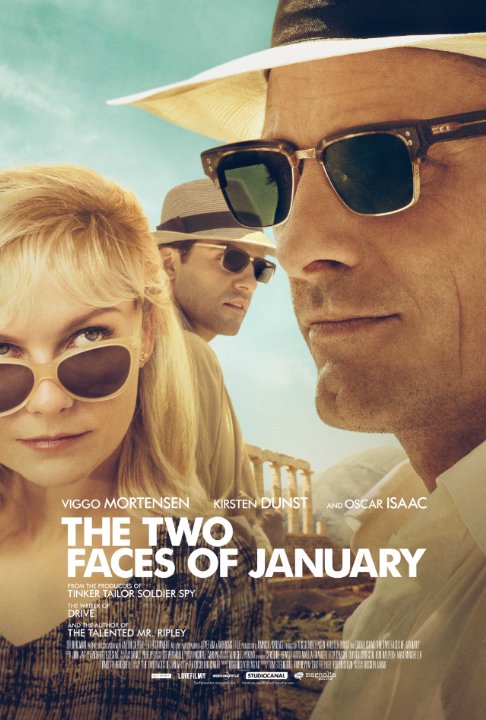 Plot: A young, affluent American couple visiting Greece happen upon a young grifter and is more than happy to become part of their world. But the two don't just want him as a friend - they need his help with a problem: the removal of a body. Even as he becomes more and more infatuated with the young wife, he is drawn deeper and deeper into their dark world - and soon he may not be able to escape. -- Chris Kavan

The three leads take some cues from the Hitchcock school of acting in this well done old-fashioned thriller, actually shot on location in Greece and Turkey. It looks great by the way. Viggo Mortenson is the charming chatterbox with a dark side, Oscar Isaac is the wide-eyed youth with an inferiority complex, and Kirsten Dunst is the blonde-nuff said about that when it comes to Hitchcockian thrlilers. Filmed economically, The Two Faces of January is a tense little flick that's filmed on these wide-open spaces with all the 1960s glamour yet feels claustrophobic thanks to its tiny cast and the sticky situations they find themselves in.

A slightly above average desert sand colored crime thriller, you immediately associate with a solid Hitchcock mixed with elements of an Agatha Christie novel. The rich American couple Chester (Viggo Mortensen) and Colette (Kirsten Dunst) are on vacation in Europe and meet in sunny Greece the American guide Rydal (Oscar Isaac) who isn't afraid to swindle people on a small scale. He offers Chester and Colette a guided tour through the city. Eventually, the couple also doesn't appear to be innocent and after Chester killed a fairly intrusive private investigator, Rydal offers its services to help. What follows is a psychological jousting in which jealousy and a budding romance plays a central role. A stylishly filmed psychological thriller, with excellent performances and a subtle captured …

No posts have been made on this movie yet. Be the first to start talking about The Two Faces of January!