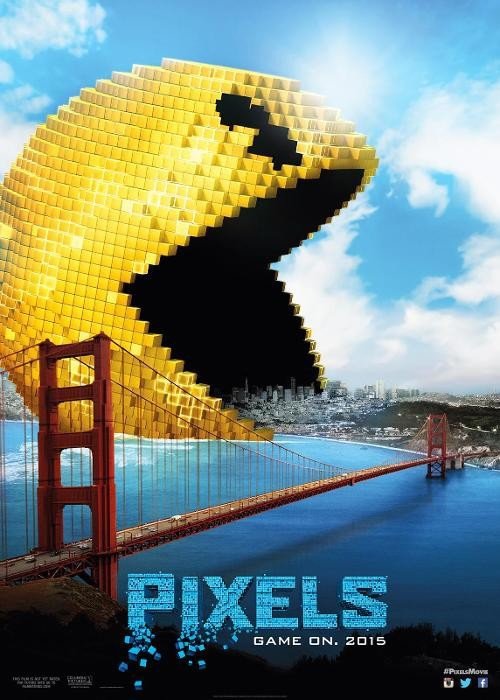 Plot: A group of aliens come across a video feed from Earth - that of primitive 8-bit video games. Unfortunately, they take this to be a declaration of war and promptly attack the planet... in the form of the very same games they have been watching. Now it's up to a rag-tag bunch of video game nerds to stop the attack before the entire planet falls the the 8-bit menace. -- Chris Kavan

Thanks to an underdeveloped and unfunny script with pieces that refuse to fit together, all of the creativity that went into "Pixels" ends at its premise.

I laughed a few times - so there's that and the video game effects and 80s-era messages from the aliens are pretty good but the movie fails because the characters are, for the most part, worthless. Adam Sandler doesn't even seem to be trying at this point and his interactions with the stunning Michelle Monaghan are just cringe-worthy. Josh Gad is a shouting conspiracy nut, Kevin James is the president (and an idiot on to a Bush-level degree) and even Peter Dinklage is mostly wasted. Overall, probably as bad as you are expecting.

So I just saw Pixels and it was pretty terrible and are you seriously surprised about that. -The acting was dank. - Adam Sandler not trying anymore. - The effect's were alright. - Josh Gad was so annoying in this movie, I mean he wouldn't stop shouting. - Peter Dinklage was the only saving grace in the movie. - Kevin James is an idiot. I know some are expecting a long detail review of this but to be honest I want to save my strength and energy for another movie I'm going to review and that's The Third Man. I'm really taking my time with that and make the best out of it so before I review a masterpiece like The Third Man, here's something really shitty.

A fun summer film. Yes, your childhood is safe

Actually a very good movie, it is very funny and has some cool action sequences throughout, there are also some great nods to 80s arcade gaming which will please retro gamers. In truth, I didn't particularly care for Adam Sandler's character, but he did have some pretty good skills that came in handy later on in the film. I was more interested in Josh Gad's character or Peter Dinklage's character, because Josh Gad was funny as always and Peter Dinklage, while supposed to be rather unlikeable as a character, I found him to be a rather sarcastic, rather mysterious character. A fun summer blockbuster that busts some serious blocks, and it won't ruin anyone's childhoods, if that's what everyone is worrying about before watching, because it really won't.

When I 1st heard about Pixels, I was pumped & couldn't wait to see it.Now after finally watching it, Major, MAJOR disappointment.After seeing Kevin James was the president (Seriously?) the movie just went straight downhill from there.I just felt like as it went along, it just got more & more & more boring.The only good thing about Pixels was seeing all the old video game characters, remembering the old video games I use to play & the 1's I didn't recognize, trying to figure out what games they were from.God, this movie stunk.I can't think of enough bad things to say about it.If somebody told me to come up with 1 funny moment from the movie, I'd say the scene where the lady is in her closet, crying over husband, drinking wine from a sippy cup & Adam Sandler walks in.Other than that, …

Pixels (2015) PG-13 Aliens have come to wreak havoc on Earth. It seems, though, they have misinterpreted video feeds of classic arcade games. Now itâs up to a gang of video gamers to save the Earth from a weapons attack in the form of video games. Can someone just give Adam Sandler a hug because he looks miserable making crappy film after crappy film? This film should have been fun and funny. Instead we get a film that wants us to believe that someone like Kevin James can be president and that the character Adam Sandler plays is so devastated by not winning a video game contest that it ruins his life. The only actor who gives a performance with any energy is Peter Dinklage, and itâs just not enough to save this sorry film. The movie has so much product placement in it that I …

No posts have been made on this movie yet. Be the first to start talking about Pixels!