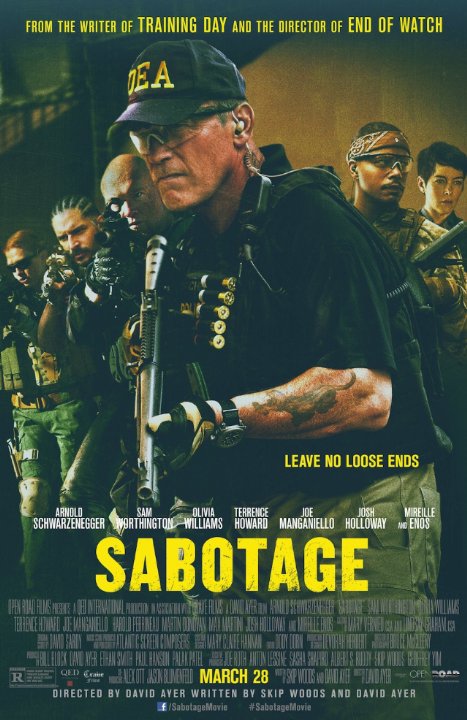 Plot: An elite DEA task force suddenly finds themselves the targets. One by one, members of the team find themselves hunted down after they rob a drug cartel safe house. -- Chris Kavan

Lots of action - not much else. The supporting cast really does the heavy lifting here with Mireille Enos being the standout with some help from the likes of Sam Worthington, Josh Holloway, Terrence Howard, Max Martini, Joe Manganiello, Olivia Williams and Harold Perrineau. That being said, even with all this talent the movie seems stale - lots of shooting and blood and revenge, but the wheel just seem to spin and spin without going anywhere. For action fans only.

I have said many times in the past that I will always remain a Schwarzenegger fan however I might have to recant on that soon as the man is getting old and really stop trying to do the same action pieces that he excelled at during the 80's just because Stallone can do it doesn't mean every aging star can. As much as I was excited when I heard he was coming back to movies I didn't realize how long exactly he'd been away. In my own opinion too long. This movie wasn't bad although not the greatest either. A couple of cool performances nothing to write home about...Unless you are extremely desperate for something to watch I would give this one a pass....sorry Arnie.

Arnold Schwarzenegger leads an elite DEA task force that takes on the world's deadliest drug cartels. When the team successfully executes a high-stakes raid on a cartel safe house. This movie was a mindless action flick with horrible and despicable characters, the movie all so fails on being good or being okay.

âSome of us are getting paid, the rest of us are just getting dead.â

So, You thought that Schwarzenegger would eventually retire on an Austrian alp, sitting on a terrace of a mountain hut with a big bierpul of "Kaiser Bier" within reach and a huge cigar between his fleshy lips while looking out over the valley, saying with a deep voice "Ich habe es Ihnen gesagt: Ich komme wieder". Or that he's wearing a bermuda and a Hawaiian shirt while sitting somewhere at the coast of California, getting a tan and looking out over the ocean. Well you were wrong. This former Mr. Universe and former governor of California came back with a rather explicitly violent action film. After the average film "The Last Stand" and the reasonably successful "Escape Plan" in which he and his eternal rival …

No posts have been made on this movie yet. Be the first to start talking about Sabotage!