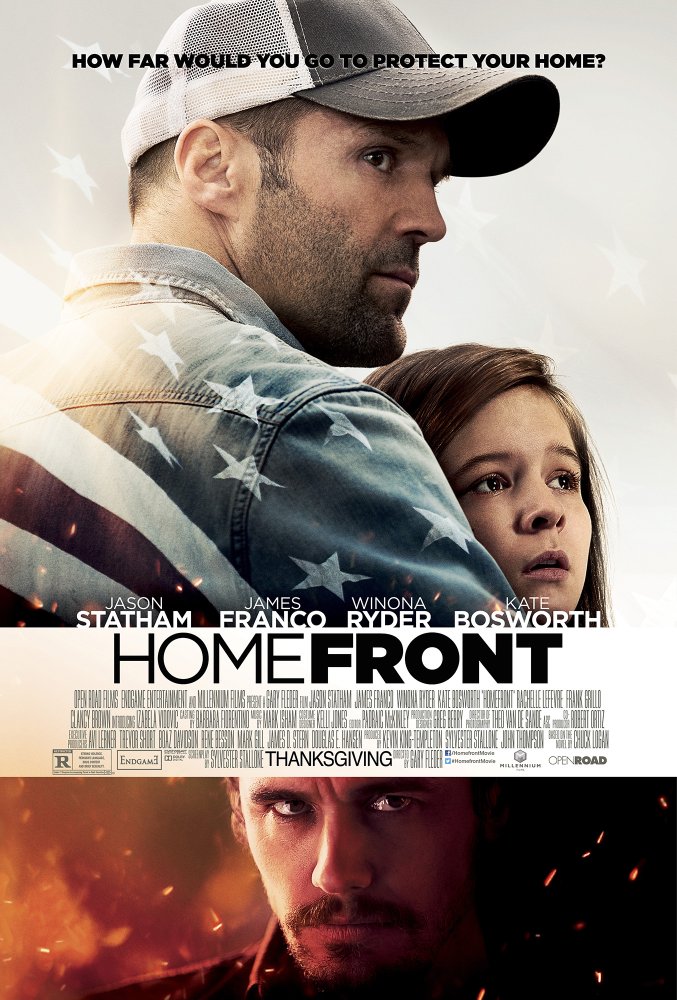 Plot: A former DEA agent hopes to move somewhere peaceful and quiet and moves his family to a small town. But he soon finds that the quaint setting hides a sinister undertone as he begins tangling with a local meth kingpin. -- Chris Kavan

Ever time I see Jason Statham in a action movie I name the top cliches that he does in movies.Home Front. This movie has It's cool action scenes but this is not the movie that I will watch over and over again, This movie as so many cliches that at times I could not stand it no more.

Statham is a One Man War on Drugs

I've learned one thing about watching the many films of Jason Statham - he pretty much plays the same character in every film. Whether he's an amped-up adrenaline junkie who has to get a rush to survive, a very "special" delivery man or a very (non) expendable member of a group of mercenaries - let's just say in pretty much every film - Statham's character is not someone you want to mess with.

Homefront - written and produced by action icon Sylvester Stallone - gives us yet another standard Statham character, but at least gives us a little bit more than "guy who punches and kicks other guys for whatever reason" for an hour and half. In this case Statham is an ex-agent, Phil Broker, who has recently lost his wife and thus leaves the deep undercover work behind to raise his young …

ok but not as good as his other movies

I really like jason staham to me I don't think he has done a bad movie yet. they are all either good, ok or great
This one is one of his lesser movies. if i was ranking it i would probably put it at the bottom.
it starts of well enough and overall its a decent film but as soon as they get back to the barn is when it starts limping. the main baddie seems to forget how to act at that point which is a shame as he was good before that.
the fire scene and what follows just doesn't look right. as well as latter fight scenes seem rushed .
jason was as good as ever and just as likeable in this role. the girl who plays his daughter was good but should of been given a little more drama..
verdict - a ok movie its something to watch. but nowhere near as good as his other movies,

No posts have been made on this movie yet. Be the first to start talking about Homefront!