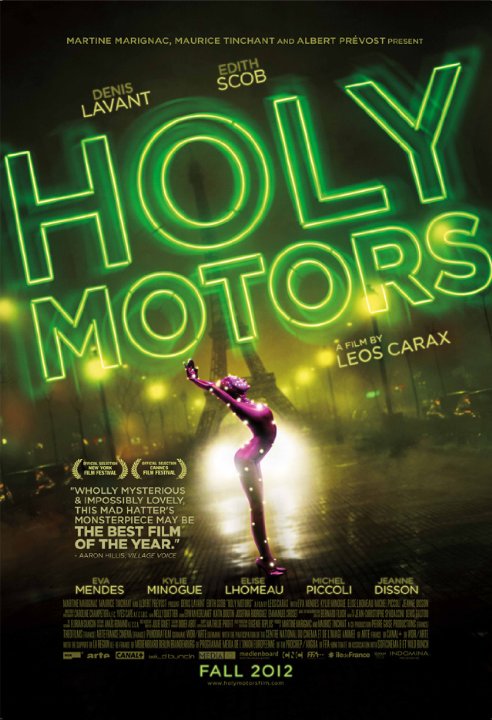 Plot: A man is driven through the streets of Paris where he takes on various roles: a family man, a wealthy industrialist, a murderer, a victim, a pauper - as he interacts with the people around him in this surreal odyssey. -- Chris Kavan

It's not too often that I'm left dumbfounded by a film but Holy Motors is, well, bizarre may not be a strong enough word. It's kind of completely off the rails - as Leos Carax gives us one man (Denis Lavant) playing many different roles - including the absolute insane Merde character he portrayed in Tokyo! (this time he gets to hang out with Eva Mendes). Also, there is an impromptu accordion interlude and a musical number that comes out of nowhere. I don't know if there are layers, theme or purposes going one here, but for Lavant's performance alone it is worth checking out. This movie is strange to the max, however, and will not be everyone's cup of tea.

To me personally, Holy Motors is a film that is easier to admire than to enjoy. Many people will like it, many will dislike it. Writer/director Leos Carax takes you on an oddly intriguing journey through the bizarre, as a man (performed beautifully by Denis Lavant) is acting as different people in different lives. I respectfully disagree with those who hail it as being some sort of masterwork, but the film is strange, gorgeous, majestic, and wonderfully original. Some of it I found to be forced, pretentious, and full of itself, while some of it I really liked. Did I admire the film for its craft? Yes. Did I actually enjoy it? Well, marginally. It's worth watching if you're into this type of weird cinema. 2.5/4

No posts have been made on this movie yet. Be the first to start talking about Holy Motors!