The Lucky One Movie Information 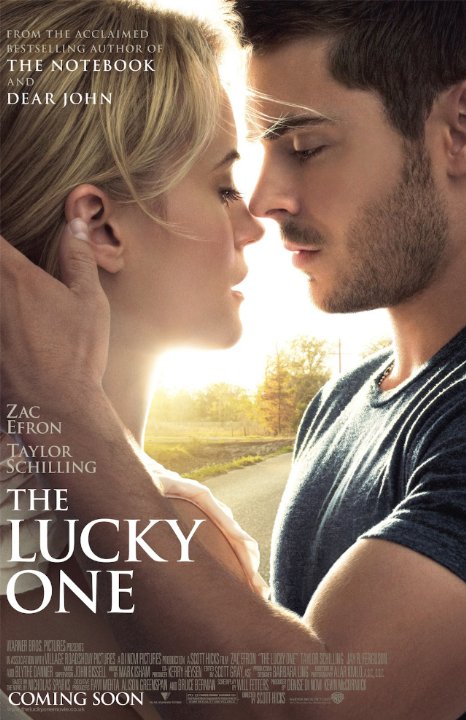 Plot: After surviving three tours of duty in Iraq, a Marine returns home and travels to North Carolina to find the woman he believes was his good luck charm. -- Chris Kavan

Logan luckily survives his third duty on Iraq with beliefs that a photograph is protecting him. When he comes back to home, he travels to North Carolina to search for the woman on the picture.

***
Watching the trailer with Nicolas Sparks saying things about his novel, I couldn't resist not to watch this film. I also haven't seen so much romance movie these days so I went to the cinema and watch this film with a friend. Oh well, as expected, with the formula Sparks has been having on his novels like "A Walk to Remember" "Dear John" The Last Song" and "The Notebook" which I still don't get a chance to see, the storyline is simple yet still watchable. And I really appreciate Zac Efron this time, his performance finally worked for me.

With the criteria I use rating a film, this movie …

The Lucky One Movie Review

In the latest adaptation of a Nicholas Sparksâ novel, âThe Lucky Oneâ tells the story of Logan Thibault (Zac Efron), a marine returning home after finishing his third tour in Iraq, who is in search of a woman in a photo he credits with saving his life. The movie opens with an exciting night raid. After the raid, the marines are regrouping when Logan spots a picture in the rubble. He walks over to pick it up and finds a woman looking back at him, on the back the words âKeep Safeâ. Just as Logan is about to walk back to where he was standing and IED goes off, killing some members of his platoon, while he survives. After several other situations in which he survives but shouldnât he credits his survival to the picture, which he has yet to find the owner of. …

The Lucky One movie review

Call me crazy, but Iâm starting to think that Nicholas Sparks needs to either: A)stop turning his books into movies, or B) locate and keep on speed dial the person who was responsible for the screen adaptation of âThe Notebookâ, because frankly, you can only expect audiences to hope for a life changing love story so many times before they stop giving you the benefit of the doubt.

THE GOOD: A grown up and---if I may be perfectly frank---smoking hot Zac Efron plays Logan Thibault, a young Marine who has survived three tours of duty in Iraq, when many around him havenât been as fortunate. He believes he owes this miracle to the photo of a young womanâBeth (played by Taylor Schilling) that he stumbled across in combat. When his tour is over, he sets out to find her and thank …

No posts have been made on this movie yet. Be the first to start talking about The Lucky One!