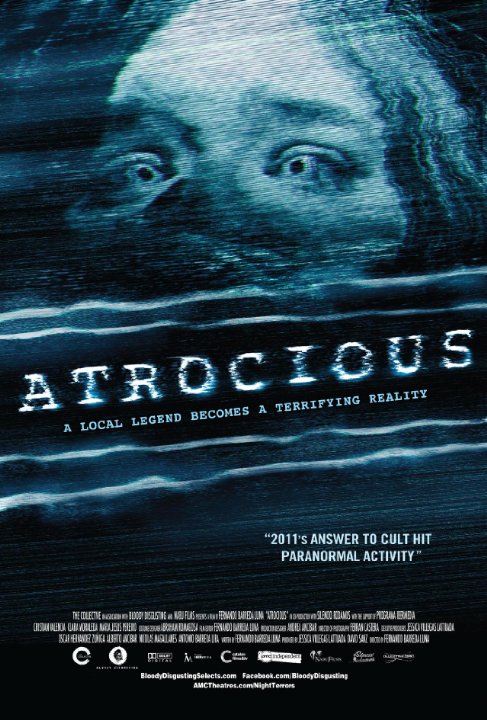 Plot: A family found dead in a country side estate - 37 hours of recorded footage over the last five days of their lives - the Legend of the Girl in the Garraf woods and the strange circumstances of how they died. -- Chris Kavan

Like the tittle of the movie says, it's just ATROCIOUS. They tried to make a huge plot twist in the end, but it only ends up confusing the audience and is just lame and not very well done.

A movie clearly trying to tap into the found-footage craze that just doesn't work. It reminded me more of Blair Witch than Paranormal Activity and the twist end couldn't save a rather boring premise. Despite its short length, it never truly is all that scary or interesting.

She doesnt have schizophrenic episodes if there is another personality. she has DID or Dissasociative Identity Dissorder. Schizophrenia is a condition where someone may feel that they are the target of an attack from their peers or family and may feel that people spy on them as well as plan to kill them because they are on to something. in this case &quot;mum&quot; acted to normal to have Schizophrenia she obviously would have had DID since she turned into a compleatly different person. But she didnt &hellip;

I would agree with that theory - the mother was suffering form some split personality break that caused her &quot;Elvira&quot; personality to go on a murdering spree. The whole Melinda story was red herring to get you to think is was supernatural entity when the truth is kind of more horrifying.

I've just watched the movie and apologize for the late answer.. :D if you still interested here is my theory: Christian gets killed by his mother like everybody else! The mother has schizophrenia... i think elvira is the other person in the mother. elvira killed her daughter michelle and after her jose gets born... SO she kills at first the dog, then the father, then jose, then the sister and christian and at last Carlos (the friend of the family who calls the police). All this has nothing to &hellip;

Having just watched the movie atrocious I am very confused as to the twist at the end.&amp;nbsp;Who kills christian and who is this woman elvira&amp;nbsp;that visits his mum deborah? Can somebody help me out here?