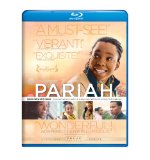 Plot: A teen threatens to alienate her family and friends through shifting identities and yearning for sexual expression. -- Chris Kavan

This is a wrenching but marvelous film that never hits a false note. The performances are terrific all around. Kim Wayans (from In Living Color) is a revelation, as is Aasha Daniels as a teen struggling with her sexual identity and her conservative parents. Pariah really hit home for me on many levels. It's also beautifully filmed and never strikes a false note. The pacing may be a bit off at times, but the unforgettable performances and story arc of the young protagonist is powerful, heart-breaking, and ultimately bittersweet. Whether you are gay or straight, conservative or liberal, Pariah needs to be seen by many. It shows with honesty, not manipulation, of what hell young gay teens go through these days. Great film and highly recommended.

No posts have been made on this movie yet. Be the first to start talking about Pariah!