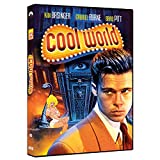 Plot: An ex-con cartoonist finds himself drawn to his own "Cool World" comics and seduced by doodle Holli Would, who wants nothing more than to escape into the real world. -- Chris Kavan

There's a lot of interesting animation and visuals, but I really wish this film had a more cohesive plot. It's downright confusing at times.

Tries to be a more adult version of Who Framed Roger Rabbit? mixing animation and live action, but can't pull off the same magic using unknown characters.

No posts have been made on this movie yet. Be the first to start talking about Cool World!