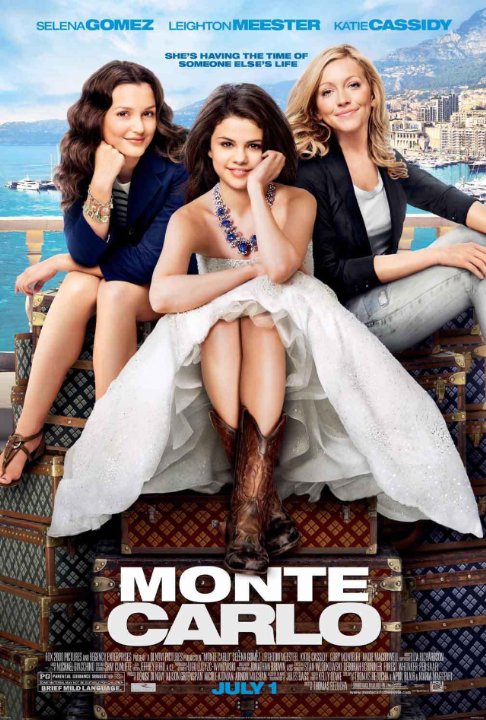 Plot: Three women on a dream vacation in Paris, which turns out to be more of a letdown, find themselves on an adventure of a lifetime when one of them is mistaken for a spoiled British heiress and they're all sent to Monte Carlo for a real vacation. -- Chris Kavan

Mistaken to be a brat heiress, Grace, with her sister, Meg, and her best friend, Emma, will experience a twisted adventure to Paris plus a luxurious life in Monte Carlo. *** I didn't expect much from this movie, but I admit, it kept me watching the whole film. I know Selena Gomez cannot deliver so much but her acting pretty passed for the role. Emma (Katie Cassidy) entertained me much more than the film itself. I wished the story was framed on her, instead of Selena. Good enough for a relaxing experience.

Very cute, sweet movie. If you have seen a trailer or commercial its not too hard to know what will happen in the end, but it was worth the watch. Good for young teens too.

Grace (Selena Gomez) is an ordinary girl who becomes an accidental princess when a family summer trip to Paris turns into the fantasy of a lifetime. Living like royalty, Grace, along with her two best friends, discovers who she really is â by assuming another personâs identity.

well i may be an adult and a man at that but that did not stop me from loving this movie it was realy realy good and like i said before this is coming from a guy who is in his 20s so you know it has to be good i watched it with my little sister and we both loved it ps. selina gomes is as hot as always in this movie and as good of actress as she always is the movie is cute and very funny ;spoiler alert' it is about this girl who goes on trip to bound with her stepsister who she hates and her best friend but as the trip goes on they realise 2 things 1 that 1 is not as bad as the other thinks and also thing 2 that selina has a strange resemblence of a princess that has come to town and she winds up in a world of
trouble when she actualy gets mistaiken for the princess and she has to act …

No posts have been made on this movie yet. Be the first to start talking about Monte Carlo!